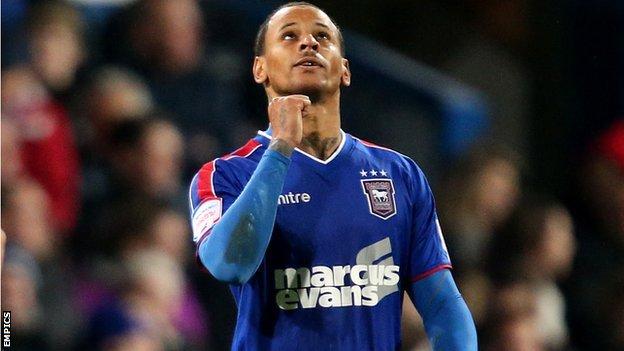 The Posh, who had lost their last four, took an early lead when Lee Tomlin collected Joe Newell's pass and shot into the bottom corner from 12 yards.

Both sides had chances to win but visiting keeper Robert Olejnik saved a header from Danny Higginbotham before Stephen Henderson denied Grant McCann.

The hosts had only won two of their last 16 games and had lost 5-0 at Crystal Palace and 6-0 at Leicester earlier this month.

The home fans had little to cheer in the first half as Ipswich failed to create a goalscoring opportunity and went behind after only eight minutes.

Tomlin capitalised on poor defending from Higginbotham and Aaron Cresswell to place a shot past Henderson.

But Campbell levelled on the hour, with his fifth goal since joining Ipswich on loan from QPR in October.

Mick McCarthy to save Ipswich?

Ipswich have gained seven points from manager Mick McCarthy's five games in charge, the same number of points predecessor Paul Jewell won during the first 12 league matches of the season.

Campbell narrowly missed a chance to grab his second of the match before Peterborough debutant Dwight Gayle wasted two chances as the match ended in a draw.

The result leaves Peterborough bottom of the Championship, one place below Ipswich in 23rd.

"The crowd were right to boo us off at half-time. I didn't have a problem with that.

"But thankfully we did improve in the second half and played with a bit more intensity.

"We'd been poor, but there was definitely a response from everyone in the second half, from the players and the crowd."

"We've got character in abundance and there's no question of us failing on that front.

"We just have to stick together and see it through.

"If we do that, and play like we did today, we've got more than enough time to turn it round and get out of it (bottom three)."