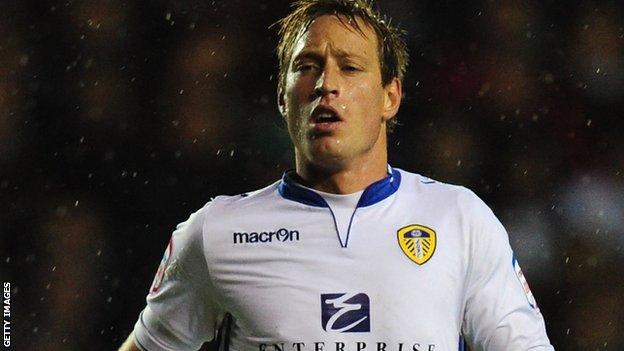 Wilfried Zaha was denied a penalty for Palace after a Sam Byram tackle before the visitors failed to clear a cross and Luciano Becchio pounced to score.

Peter Ramage headed in late on for Palace but, despite a Michael Tonge goal-line clearance, Leeds held on.

The defeat was the first for Eagles manager Ian Holloway since he took over on 3 November and meant Palace were knocked off the top of the Championship by Cardiff, who beat Barnsley.

Leeds, who ended a run of seven games without a win, started off brightly.

Jerome Thomas, who had been brought in on loan after the Leeds takeover, was a threat before Becchio had an effort saved by Julian Speroni.

At the other end, Zaha was denied by Paddy Kenny, who also produced a double save when he palmed away Jonathan Parr's curler before quickly getting up to close down Glenn Murray.

Zaha thought he should have had a penalty after claiming he was tripped by Byram but it was Leeds who went ahead when Ramage nodded a clearance against team-mate Mile Jedinak and Becchio took advantage.

Another Zaha penalty appeal came to nothing before Leeds extended their lead through Green.

Palace gave themselves hope with Ramage's header but, despite going close following a scramble in the Leeds goalmouth during the five minutes of injury time, failed to find an equaliser.

"I am absolutely delighted for the new owners. We deserved the win over the 90 minutes.

"We started the game very well and had to hang in there at times but our two new lads made the difference. Alan Tate is a good pro.

"He had a calming influence on us at the back and Jerome Thomas is as good as anyone in the Premier League, let alone the Championship.

"We needed the lift in confidence those two have given us."

"You have to give Leeds credit. They looked like the Leeds of old in the first 20 minutes by coming at us.

"We came through that period but didn't get the breaks. I thought we deserved at least a point and we did our supporters proud.

"Leeds got on the end of two things inside our box and scored two goals but there was a real scramble at the end and how the referee awarded Leeds a free-kick to relieve the pressure I don't know.

"The crowd got them that free-kick."