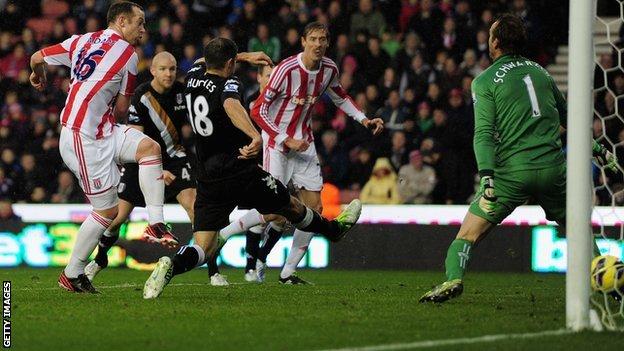 Stoke midfielder Charlie Adam's strike proved the difference in his side's victory over Fulham at the Britannia.

Adam latched on to a knock-down from Peter Crouch before scoring with a shot on the turn from six yards.

Ryan Shawcross powered a header against the crossbar and Glenn Whelan steered a shot just over for the hosts, who were creating most of the chances.

Fulham threatened late on and Dimitar Berbatov had a shot parried away by keeper Asmir Begovic.

Stoke also had a Kenwyne Jones effort disallowed for offside and their failure to add to their one-goal lead had left them vulnerably placed the longer the game progressed.

The Cottagers, however, stirred themselves into attacking action too late to take advantage of the home side's anxiety.

The defeat ended Fulham's run of four away league games without defeat, while the Potters extended a 13-game unbeaten home record in the top flight to move level on points with their visitors.

"The first-half goal from Charlie Adam was decisive. You have got to say Stoke were made to fight hard for the victory in shocking conditions at the Britannia Stadium."

Giant centre-back Brede Hangeland was suspended for Fulham, and a Stoke side sought to expose the Norwegian's absence by testing the visitors in the air.

Fulham had an early scare when home defender Robert Huth sent a header just wide from a corner but it was a warning the Martin Jol's side failed to heed.

With 26 minutes gone, Ryan Shotton swung in a corner from the right and Crouch, despite the attention of two defenders, nodded down at the far post for Adam, who took a touch before swivelling and shooting in from close range.

It was the second goal in three games for the midfielder, who has started to look more like the influential player he was at Blackpool than the inhibited figure at Liverpool last season.

Stoke have not lost at the Britannia Stadium since February and, even though Fulham were pretty in possession, they rarely troubled their hosts.

The stylish Berbatov has been the visitors' star of the season so far but he struggled to impose himself on the game as Stoke marshalled him into areas where his influence was limited.

Stoke carried the threat they are renowned for from set-pieces and Shawcross almost doubled their lead when he beat Cottagers keeper Mark Schwarzer to a Matthew Etherington corner only to see his header come back off the crossbar.

Tony Pulis's side were the team creating the chances and, after Fulham failed to deal with another cross, Jon Walters laid the ball to Glenn Whelan, whose 18-yard strike went just over.

The home side dropped back in the latter stages of the match and, while Begovic was called into belated action in keeping out a Berbatov shot, Stoke stood firm to secure the three points.

Stoke boss Tony Pulis: "I thought the game should have been out of sight. It was only in the last 10 minutes of it that they came into it.

"We got really nervous. Up until then we could have got five or six goals.

"I thought we were the better team right up until about the 82nd minute. Although they had a lot of possession it was always back and across, not through us."

Fulham manager Martin Jol: "In the first half, they bully teams and we couldn't get the ball out of our half.

"The second half was better and I think that we deserved a point. Stoke is always difficult for us. They have a lot of size and [our centre-back] Brede Hangeland was not there for us."