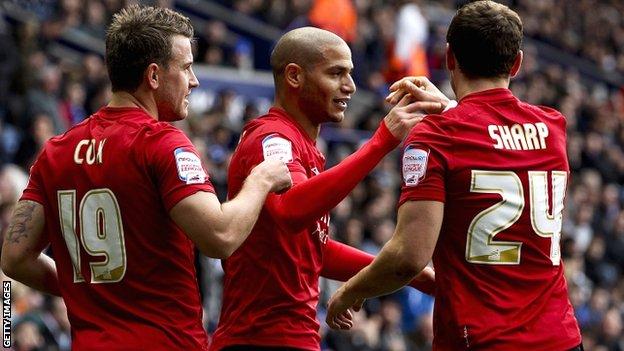 Adlene Guedioura returned to Molineux to hit the winner for Nottingham Forest against his former club, who have now gone eight matches without a victory.

Hosts Wolves had taken an early lead when the ball deflected to Bjorn Sigurdarson, who finished superbly.

Both sides had chances in a fluctuating encounter before Guedioura fired in an unstoppable shot from 25 yards.

Wolves might have thought their fortunes were changing when Jermaine Pennant's attempted pass to Kevin Doyle deflected off a Forest defender into the path of Sigurdarson, who took full advantage.

But Doyle had a shot blocked and Forest soon levelled when Sharp collected Henri Lansbury's long, diagonal pass and recorded his fourth league goal of the season.

The first half continued to provide opportunities for both sides, Simon Cox shooting narrowly wide for the visitors and Forest keeper Lee Camp denying Sigurdarson with a superb save from point-blank range.

However, Wolves started slowly after the break and it was not long before they were behind again.

Guedioura's ferocious shot into the top corner was worthy of winning any match but the Algeria international did not celebrate against the club where he spent three seasons - although his strike was applauded by some sections of the home support.

A rare Wolves attack resulted in Bakary Sako shooting over the crossbar and substitute Sylvan Ebanks-Blake headed straight at Camp late on, but Stale Solbakken's side now lie 17th after their fourth defeat in five matches this month, while Forest are on the fringes of the play-off places.

"I was not happy with the way we defended. It was too open and we allowed them to counter-attack.

"After conceding the second goal we looked like a team that had not won for a while.

"Safe balls went wrong and many players made the wrong decision.

"We need to believe in what we are doing and I think it was a bit too wild west sometimes."

"In the first half it was end to end and it could have been any score.

"We had a discussion at half-time about changing things. They wanted to keep going as we were but as the manager you think we can't be that open.

"But we are still a threat on the break and that proved to be the case.

"We are a team who can score but we can also concede so we want to keep the one and negate the other. We are a work in progress."