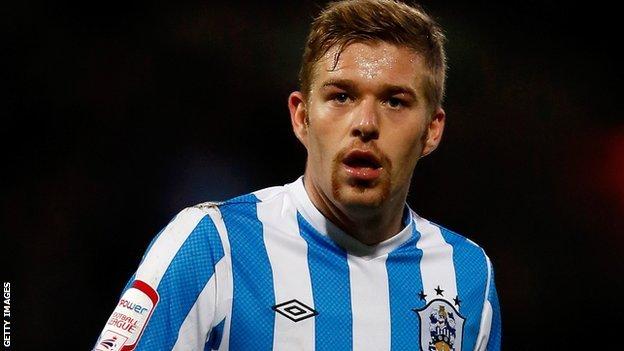 Ten-man Huddersfield salvaged a point from the game against Charlton courtesy of Adam Clayton's late penalty.

The visitors had Keith Southern red-carded in the first half for a challenge on Michael Morrison.

Charlton capitalised when Rob Hulse swept in a Bradley Pritchard cross to put them in front after 60 minutes.

But the Terriers were awarded a penalty for Chris Solly's challenge on Peter Clarke and Clayton converted powerfully from the spot.

Clayton's first goal in 12 matches meant the Addicks were denied a fourth league win in on the trot.

Charlton boss Chris Powell had given Arsenal loanee Emmanuel Frimpong his debut for the club but he almost saw his side go behind early on.

A Clayton shot was cleared off the line and, although the ball fell kindly for Clarke, he skied his effort over the bar.

Huddersfield suffered a setback with Southern's dismissal by referee Lee Collins and Charlton used their numerical advantage to build up the pressure which led to Hulse's opener.

The visitors were denied a penalty for what they perceived as a Salim Kerkar handball before they got the spot-kick from which Clayton scored from after 88 minutes.

Hulse might have won it for Charlton but he had a close-range strike saved by Huddersfield keeper Alex Smithies.

Huddersfield manager Simon Grayson: "I've seen it [the sending off] on the DVD and it's two committed players going in 50-50 on a wet pitch.

"He [Southern] clearly got the ball first.

"We will be appealing. It does feel like a win for us though, scoring so late."

Charlton manager Chris Powell: "It's not a sending off. It's an honest challenge and both didn't pull out.

"[The referee] makes a decision and it's 11 against 10 and it can be tough breaking them down.

"We got the breakthrough and had a chance to wrap the game up. It wasn't taken and we had to stand firm. We just couldn't hang on.

"We had chances to win it even after that and it wasn't to be."