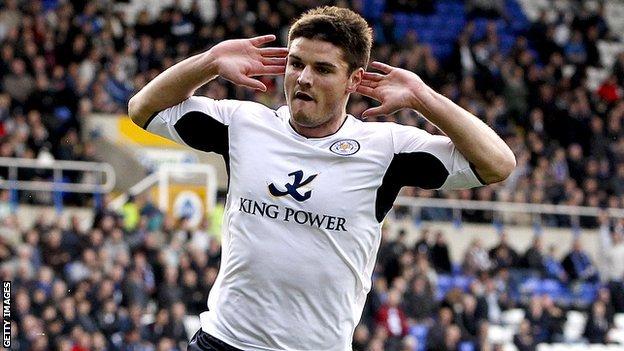 Leicester City winger Ben Marshall scored one and set up another as the visitors piled more misery on struggling Sheffield Wednesday.

The 21-year-old combined in a one-two to send Danny Drinkwater clear for the opener five minutes before half-time.

Marshall then doubled the lead on 76 minutes with a cool left-footed finish into the far corner.

Defeat leaves the Owls winless in their last four league games and languishing in the relegation zone.

Leicester's win means the Foxes climb to third in the division and they dominated large portions of the game at Hillsborough.

In good form after overcoming Ipswich 6-0 a week ago, Nigel Pearson's side enjoyed plenty of possession but only took the lead four minutes before half-time.

Wednesday felt they should have had a free-kick when striker Jay Bothroyd went down on the halfway line but the referee allowed play to continue.

Drinkwater combined well with Marshall before the former Manchester United youngster fired into the far corner in clinical fashion.

In the second half Marshall continued to influence proceedings, forcing Owls keeper Chris Kirkland to smartly palm a shot around the near post.

But the ex-Stoke man, who played for Wednesday on loan last season, sealed all three points with 15 minutes remaining, curling a measured left-footed finish into the far left corner of the net.

It was no more than the Foxes deserved and at full-time the boos echoed around Hillsborough.

"That is the first time we've been outplayed and outfought. When things aren't going so well you have to stick together and dig in but we didn't do that.

"We made so many basic errors.

"We are a little bit naive in some of the things that we do and we haven't got many talkers. But it's no good getting too downhearted.

"We've got to stick together, we always knew it was going to be difficult at this level. But I thought the fans stuck with the team and they've got to do that."

"We took a bit of time to get our game going today but I thought the players were very professional with the way they went about it and for the large part I felt we controlled the game.

"I think when you play against sides who have had a bit of a difficult time the first goal is always very important and for us to go in at half-time with a lead was very, very important today.

"I don't think Wednesday have recovered too many times from a losing position this season.

"Dave is a very experienced manager and I'm sure they'll pull it round. For this season for them I think it's about trying to consolidate after last year's promotion."