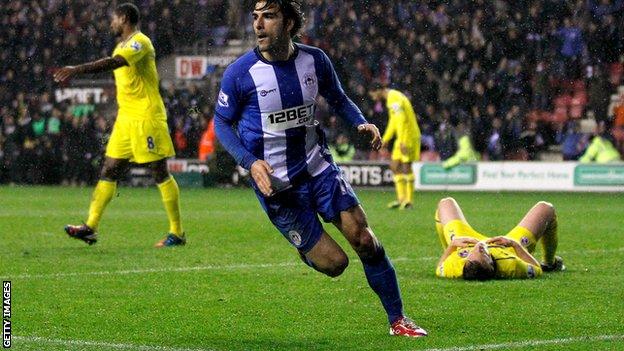 Jordi Gomez scored a stoppage-time winner to complete a memorable hat-trick and earn Wigan a dramatic victory over Reading at the DW Stadium.

Sean Morrison's first league goal had given the Royals the lead before Gomez levelled after Adam Federici had spilled his initial shot.

Gomez headed the hosts 2-1 ahead before Wigan keeper Ali Al Habsi allowed Hal Robson-Kanu's shot to bounce off him into the net to make it 2-2.

But Gomez hit the winner from 10 yards.

The Spanish midfielder was making his first league start for two months and his treble ensured chairman Dave Whelan celebrated his 76th birthday in style.

It brought Wigan's two-match losing run to an end while Reading, who had secured a comeback win over Everton last week, were crestfallen at the end.

They will argue they should have had a penalty for a challenge by Latics full-back Maynor Figueroa on Jay Tabb, but Reading's appeals were waved away by referee Howard Webb.

Nevertheless Wigan, with several key players absent through injury including skipper Gary Caldwell, were full value for the points.

There was no evidence of the drama to come when Latics striker Arouna Kone headed Jean Beausejour's cross wide while unmarked from six yards out.

And it looked like being a frustrating afternoon for Kone and his team-mates when the Ivory Coast striker rounded Reading keeper Adam Federici following Gomez's defence-splitting pass only for Nicky Shorey to clear his effort off the line.

Having prevented his side from falling behind, Shorey then whipped in a free-kick which allowed Morrison, 21, to head the visitors ahead in the 35th minute.

Wigan brought on Franco Di Santo at the start of the second half and the substitute set up Gomez for a 58th-minute equaliser after keeper Federici had failed to hold on to his initial shot.

"A dramatic end to a game high in drama. Jordi Gomez will get the headlines for his hat-trick but Reading will feel they should have come away with a point after having a strong penalty appeal waved away."

Gomez, who was jeered early in the game for some poor touches, then made it 2-1 with a clever header after meeting Beausejour's cross - but the drama was only just beginning.

With time running out, Reading were gifted an equaliser when the usually reliant Al Habsi somehow let Robson-Kanu's speculative effort bounce off him into the net.

But the Royals dropped back into the relegation zone after former Barcelona youth player Gomez helped ease Al Habsi's embarrassment by finishing from 10 yards after clever work by Kone deep into stoppage time to the delight of the home support.

"Nobody deserved a hat-trick more than Jordi.

"The crowd were too vocal against him and I hope that they realise that the only thing Jordi does is give his life for Wigan Athletic and to win football games.

"I hope we all realise that and he gets a bit of warmth the next time he's on the pitch."

"I think if the referee had given the penalty on Jay Tabb we would have gone on to win the game.

"Someone of Howard Webb's experience and quality, you would have expected him to get that one right.