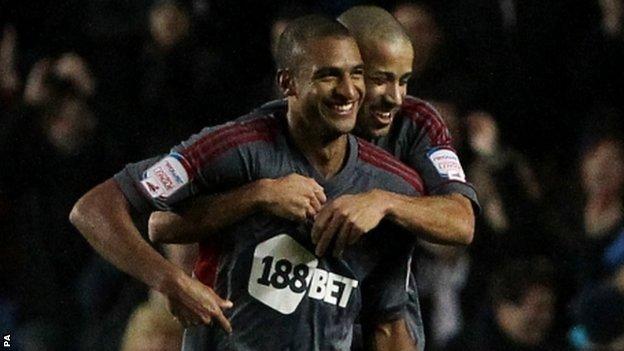 Craig Mackail-Smith also headed against the bar before Bruno Saltor put the Seagulls ahead with a 30-yard strike.

But Bolton snatched a last-gasp point when Ngog scored from close range.

Ngog's goal was the last kick of the game and preserved Dougie Freedman's unbeaten start as Bolton boss - a run of five games.

It also kept Brighton out of the Championship play-off places, denying them a win which their dominance had looked certain to deliver.

Gus Poyet's side could have been out of sight by half-time, while Bolton's only sniff of a goal before the break came when Tomasz Kuszczak denied Chris Eagles.

Wanderers improved after half-time, and felt they should have had a penalty of their own when the ball hit Marcos Painter's arm in the box.

But Brighton took the lead after 54 minutes when Mackail-Smith was fouled by Matt Mills and, after Orlandi's free-kick was cleared to the edge of the box, Bruno drove into the bottom corner.

More Seagulls goals almost followed. Orlandi tested Bogdan again before shaving the post with another effort, and Will Hoskins also saw a shot saved by the Bolton keeper.

At the other end, the visitors had gone close through substitute Jacob Butterfield, who also brought a fantastic save from Kuszczak, but their hopes of a point appeared to have disappeared before Ngog struck.

Brighton boss Gus Poyet: "I don't think there is a manager in the whole world who can be upset with the players. We are not getting the credit we deserve.

"It should have been one of the greatest nights at the Amex. I can't remember being involved in a game like that.

"There is no other team who can play the way we did against Bolton and yet it finished 1-1.

Bolton manager Dougie Freedman: "Brighton were fantastic. I have seen them many times and this was certainly one of the best performances. They will be gutted not to have won.

"When you have one chance, as the one that came our way, you need to take it and David Ngog made no mistake.

"It was all about the character and determination that we showed. We didn't give up."