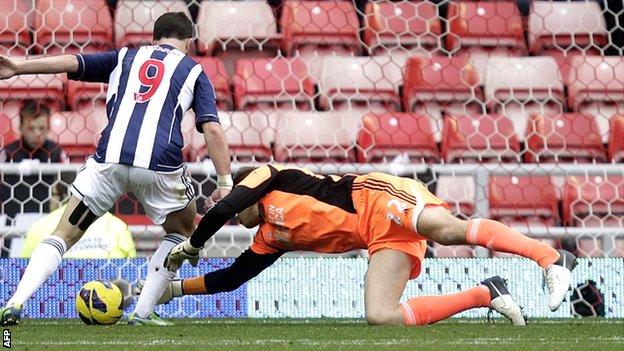 West Brom went third in the Premier League after recording four successive top-flight wins for the first time since 1980 with victory at Sunderland.

Zoltan Gera curled them ahead and it was 2-0 by half-time as Simon Mignolet fumbled and Shane Long tapped in.

Stephane Sessegnon converted a rebound late on in a tense finale but Marc-Antoine Fortune sealed it on the break.

For all the revelation over West Brom this term, their away form had not been a strong point, with only two wins in 11 league matches on their travels prior to this fixture, but Steve Clarke's side have now proved they are capable of grinding out results.

Sunderland have won only once at home this season but had taken renewed confidence from a win at Fulham, their three goals at Craven Cottage equalling their tally in four league matches at the Stadium of Light.

In overcast conditions on Wearside they had the better of the early exchanges, Sessegnon the main attacking outlet.

The Benin international showed sublime touch to create a shooting opportunity and his effort from the edge of the box was kept out, albeit somewhat awkwardly, by Boaz Myhill diving to his right.

Sessegnon tested Myhill again with a close-range header before Gera opened the scoring for the visitors, collecting a pass from Peter Odemwingie and sending a left-foot shot towards the corner that Mignolet got a hand to but could only help into the net.

Mignolet's afternoon then got worse when he spilled a seemingly innocuous over-hit through ball from Chris Brunt and Long, following in when others might have given up the chase, dispossessed the keeper for the softest of goals.

Sunderland sent on James McClean at the break and made a purposeful start to the second half, but were also vulnerable to the counter-attack, an alert Mignolet needing to advance from his line and clear the danger when Long broke through.

Louis Saha was introduced as Sunderland gambled for a way back into the match and fellow substitute Gardner's free-kick deflected into the corner off Marc-Antoine Fortune in the wall to halve the visitors' lead.

However, Baggies substitute Lukaku appeared to have made the points safe, calmly sending a left-footed penalty into the bottom corner after Liam Ridgewell fell under a lunging slide from Adam Johnson, although replays suggested little contact had been made.

West Brom remain the only side not to concede a goal in the opening 30 minutes in the Premier League this season.

A Sessegnon tap-in after Steven Fletcher's header was parried by Myhill produced a late flicker of hope among home supporters but Fortune settled the contest in added time as the Baggies gave a further demonstration of their attacking prowess this season.

"The second goal makes it a tough task but we fought back terrifically and I thought we were going to force the equaliser first time round at 2-2 and of course the penalty decision goes against us.

"I was very pleased with the second-half performance, delighted with it.

"They're probably as good a counter-attacking side outside the top sides and are up there on merit."