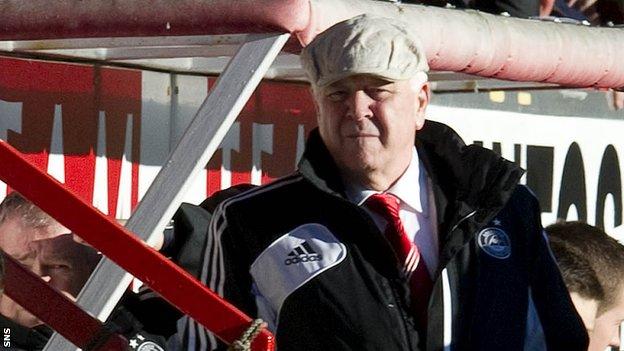 Aberdeen manager Craig Brown felt his side showed too much respect to Celtic after losing 2-0 at a packed Pittodrie.

The result meant the Dons lost their unbeaten record at home in the league this season.

"We gave Celtic too much respect and didn't have the assurance and confidence to keep the ball," Brown told BBC Scotland.

"Normally we keep possession well, home or away. We didn't have the control of the ball we normally have."

With over 18,000 at Pittodrie for the lunchtime kick-off, Brown was disappointed not to have taken something from the match.

"I don't think we deserved to win the game but perhaps the score-line flattered Celtic slightly.

"When you play against the better or fancied teams you've got to show composure and confidence when you get possession of the ball.

"The number of balls we gave away was quite incredible today."

In a game that lacked clear goal-scoring chances, it was Lassad Nouioui who made the breakthrough for the visitors on 73 minutes.

The Tunisian, who had only been on the park for three minutes after replacing Kris Commons, was on hand to side-foot home his first Celtic goal after Victor Wanyama's long-distance shot had rebounded off the post.

Celtic's lead was doubled by ex-Don Charlie Mulgrew on 77 minutes, acrobatically converting Georgios Samaras' centre on what was his 100th appearance for the Parkhead side.

Aberdeen's best efforts came in the first half, when Johnny Hayes hit the side-netting and Niall McGinn - who had hoped to net his eighth consecutive league goal for the Dons - dragged a shot wide after being set up by Chris Clark.

During the match, Brown sported a rather fetching sand-coloured cap to shield his eyes from the sun.

"I was going to give the other bunnet to [assistant manager] Archie [Knox] but he said we didn't want to be like Jack and Victor."