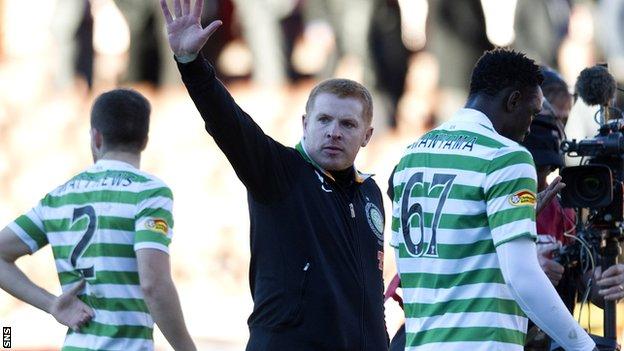 Celtic manager Neil Lennon has described his side's upcoming Champions League trip to Benfica as the hardest match of the group.

Celtic, who went top of the Scottish Premier League after a 2-0 win at Aberdeen, defeated Barcelona in their last European outing.

But Lennon insists the match in Lisbon will be an even tougher proposition.

"This game will be the toughest of our group, they will be very motivated to beat us," he told BBC Scotland.

"We're going to come up against a very motivated team at home, who are very impressive at home and who are going very well domestically.

It's a huge three points for us. We looked a good team and it sets us up nicely for Tuesday

"If we can get through midweek with a draw or a win that would be marvellous."

Celtic are second behind Barcelona in Group G on seven points, three better off than the Portuguese side, who drew 0-0 in Glasgow on match-day one.

"No-one would have expected us to beat Barcelona, it was a fantastic night, but it's gone, it's history," added the manager.

"I said to the guys, I'll take you out in 20 years for a pint and we'll talk about it, but it's gone now and we want to qualify anfd that's our whole focus.

"I want to qualify now, it would mean so much to the club.

"In the last 16 you just never know where it will take you."

Following the match in Aberdeen, Lennon was pleased to get back to winning ways in the league after dropping points in the last three domestic outings but had adopted a different approach on a heavy Pittodrie pitch.

"I put a powerful team out today because I felt we had to be physical," he explained.

"I thought we had control fo the game today for long periods, without quality at the end of it, but we got there.

"It's a huge three points for us. We looked a good team and it sets us up nicely for Tuesday."

The Celtic boss was particularly pleased by substitute Lassad Nouioui getting his first goal for the club, after suffering a torrid time with injuries since signing in the summer.

"We really like the look of him," he enthused.

"He's been unfortunate that he missed the pre-season and he's just been picking up wee niggly injuries.

"We're trying to drip-feed him into the squad and that will have done his confidence the world of good."

"It's not a hamstring, he got a dead leg just at the side of the thigh, hopefully, with a bit of rest and recovery he should be okay," he said.