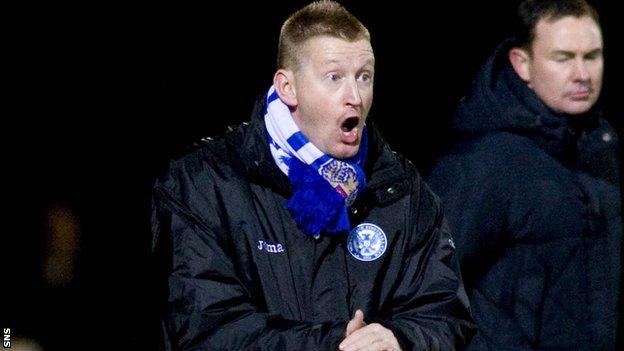 St.Johnstone manager Steve Lomas wants his players to learn how to finish games off after his side drew 1-1 at with Ross County at McDiarmid Park.

A Liam Craig own goal cancelled out Saints' captain Dave Mackay's first goal of the season.

"The lesson for us is that you've got to kill games off," said Lomas.

"If you look at the stats and the chances, we should've won a couple of games today."

The Northern Irishman was quick to take the positives from the Perth encounter, but wished they could have completed the job.

"We're the home team, we've got to take the game to Ross County," said Lomas

"There was some good play and we got into some good situations, but through good defending from Ross County and a bit of poor finishing from us, we didn't kill the game off.

"If we had got that second goal we would've run out comfortable winners."

In front of just over 3,000 people, Steven MacLean had the best chance of a drab first half, but County's Michael Fraser saved the long-range strike.

And it was MacLean who set up Mackay for the opener on 51 minutes, the defender driving it home at the near post.

Saints almost doubled their lead when Gregory Tade's cut-back found MacLean, but his 12-yard goal-bound effort was spectactularly cleared off the line by Mihael Kovacevic.

Then, against the run of play, County equalised when an Iain Vigurs cross-come-shot was diverted into the net by Liam Craig.

However, Lomas still has his eye on a top half finish.

"Celtic aren't running away with it which is good and it's an incentive that second place is up for grabs, so it's there to play for," he said.