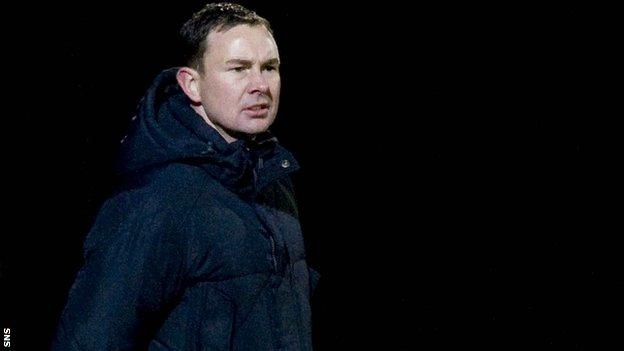 Ross County manager Derek Adams praised the quick thinking that earned his side a draw with St. Johnstone at McDiarmid Park.

Dave Mackay's second-half goal was followed by Liam Craig diverting into his own net from Iain Vigurs' shot.

"Quick thinking was what was going to either win or draw the game, because there wasn't a lot in it."

Adams paid compliments to the speed of thought with which his captain initiated the equaliser.

"He's a player with great intelligence and it was a good ball from Richard [Brittain] just in behind the full-back and [Iain] Vigurs takes it well," he said.

In a physical encounter, St. Johnstone's Steven MacLean had the best chance of a drab first half, but County's goalkeeper Michael Fraser saved the long-range strike.

It was MacLean who set up Mackay for the opener on 51 minutes, the defender driving it home at the near post.

Saints almost doubled their lead when Gregory Tade's cut-back found MacLean, but his 12-yard goal-bound effort was spectactularly cleared off the line by Mihael Kovacevic.

Then, against the run of play, County equalised when an Iain Vigurs cross-come-shot was diverted into the net by Liam Craig.

And, amid all the current talk of league reconstruction, the Staggies' boss made a case for why it would be better if things just stayed the way they were.

"It's a fabulous league this season and everybody wants to pick up points and win just to keep away from the bottom of the table," said Adams.

"We have to have more teams competing in Europe after the Christmas period - so why divide the wealth into 16 teams and take it away from a 10 or a 12-team league?"