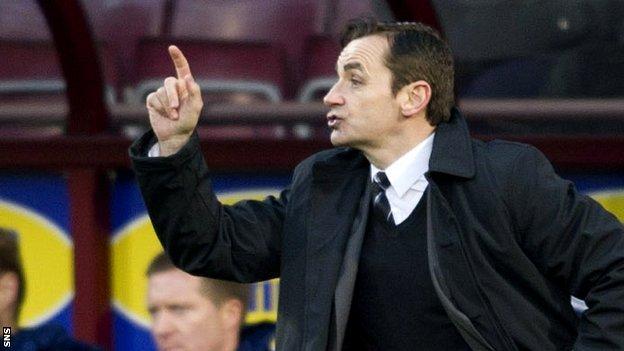 St Mirren manager Danny Lennon spoke in defiant terms despite a run of poor form which leaves his side a point off bottom spot in the league table.

But Lennon praised his team's character, and insisted all they needed was luck on their side.

"We're all in this together," he said. "We just seem to be on the wrong end of the rub of the green.

"We're certainly in a position at this minute in time that I don't think we deserve to be.

"You look at the game today, and what separates the sides but a deflected goal? That's the sort of luck or misfortune, at this minute in time, that we're having."

And Lennon insisted his side were prepared for an emotionally-charged atmosphere at Tynecastle for Hearts' first home match since the announcement of financial problems at the club.

"We knew it would be a hostile environment we were coming into today," he said. "But I thought that we handled that fantastically well.

"I think there's no doubt, from the board of directors, to the players, to the wonderful Buddies supporters, we all need to stick together, and this is the thing that really brings out the characters.

"We're all hurting at this minute in time. We share every emotion that the fans feel.

"What really pleased me today was the level of performance and the character shown by the players from start to finish - the commitment, the passion.

"If we've got that for the remaining games of the campaign, we'll be fine."

But, for Lennon, the focus now turns to a potentially crucial match on Saturday, when St Mirren host bottom side Dundee, who are unbeaten in their last three matches.

"We go into a very important game next week," he said. "Dundee's on the ascendancy and it's got the makings of a right cup final.

"There's going to be a lot riding on the game next week."