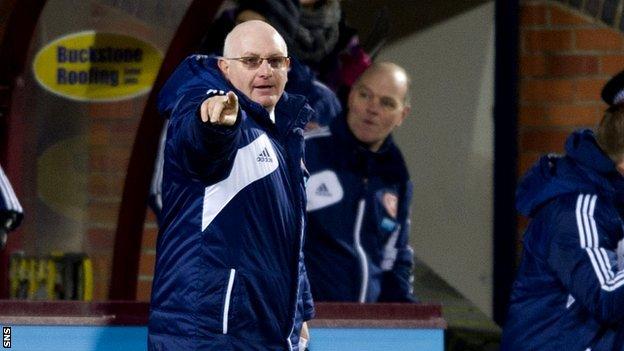 Hearts head coach John McGlynn wants to build momentum on and off the pitch after an emotional win over St Mirren.

McGlynn was speaking after victory in the club's first home match since the announcement of financial problems.

And the manager called on fans, who turned up in large numbers, to continue to back the club.

"We can only do our part on the pitch, we need everyone to back us off the pitch, because we're certainly not out of the woods," he told BBC Scotland.

McGlynn admitted it had been vital for the team to get a result against St Mirren in front of a packed Tynecastle crowd of over 16000.

"It's massive that we put on a performance today and got a result for the fans," he said after the 1-0 victory.

"It was a massive, massive Hearts support today, so, to win the game, it's everything.

"We wanted the fans to go out of Tynecastle tonight happy and I'm sure they did."

McGlynn also felt sure the fans would not have been frustrated at the length of time it took for a dominant Hearts side to break down the visitors' defence, with Danny Grainger's 63rd minute goal the difference between the sides.

"I'm sure they realise that St Mirren came here to defend very well, to make things difficult for us," he said.

"They were coming here on the back of five defeats, so they were never going to open up.

"So we had to be patient, and we had to stick to it, and that's what we did.

"We were maybe a wee bit fortunate with the goal. But he's struck it well, and when you do that, sometimes you get the rewards."