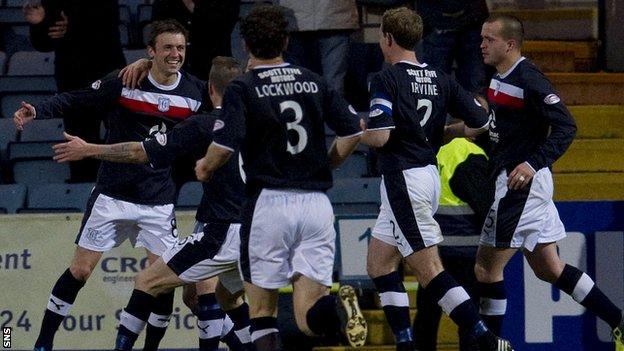 Manager Barry Smith is convinced Dundee are capable of staying in the Scottish Premier League if they keep up recent high standards.

"We are starting to pick up points now," Smith told BBC Scotland after Saturday's 3-1 win against Hibernian.

"The players are beginning to believe that they can compete at this level.

"If we keep putting in performances like we have in the last few weeks then we can get into a position to make sure we are in this division next year."

Dundee remain bottom of the SPL but are now just one point behind St Mirren, who they meet in Paisley next weekend.

"There's a long way to go and we will just concentrate on ourselves," said Smith on the battle for top flight survival.

"St Mirren are down there as well but there are a lot of teams round about.

"There are a lot of points to be played for and it's very early in the season.

"It's going to take a lot of hard work but I know I have a squad that is capable of putting in what it takes."

Dundee beat Hearts and drew with Motherwell before taking on Hibs, who had the chance to move back to the top of the league with a win.

And the Dark Blues turned in a great display, with Kyle Benedictus hammering in his first goal for the club in the first half.

Stevie Milne bundled in a second goal after the break and Kevin McBride slammed home a penalty before Leigh Griffiths's late consolation goal.

"The fans have supported us through the good times and the bad times and it's great to put on a performance like that in front of them," enthused Smith.