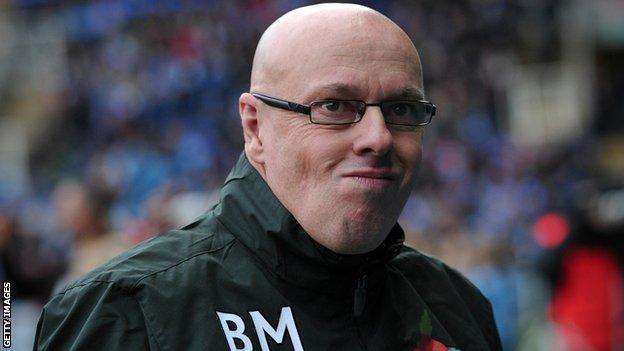 Reading manager Brian McDermott says he felt a huge sense of relief after his side beat Everton 2-1 for their first Premier League victory of the season.

Steven Naismith opened the scoring for the Toffees before two second-half goals from Adam Le Fondre's lifted the Royals out of the relegation zone.

The life of Brian (at Reading)

2011-12: Promoted to the Premier League after winning the Championship with 89 points.

"I'm so pleased for the players. It's been coming. We could have had more points but that is not relevant now."

The pressure had been building on McDermott, 51, following his side's stuttering start to the season and his task would not have been helped by reports linking PSV Eindhoven boss Dick Advocaat with his job.

But despite intense first-half pressure from Everton, McDermott's side managed to keep themselves in the game and Le Fondre's goals were enough to seal victory and lift Reading out of the relegation zone on goal difference at Aston Villa's expense.

"In any sport you need to stay in the game and we were at half-time," he added.

"We didn't get close enough to them and gave them too much respect, but we raised the tempo and waited for our opportunity, and Adam took his chances."

McDermott, who said he was looking forward to celebrating with a beer and curry, added he could now watch Match of the Day for the first time this season without "worrying about the result".

"Anybody that comes to the Madejski Stadium needs to know they have been in the game and Everton will tonight," he added.

"We are a working man's team and we play the way we play. It is the Reading way and maybe in a few years we'll be able to play differently.

"I'm just pleased for the players because it's been coming. We've done it today against a top side, with a top manager and that will give them confidence.

"This is a good time to be a Reading supporter. We've had nothing but success over the past 12 years."