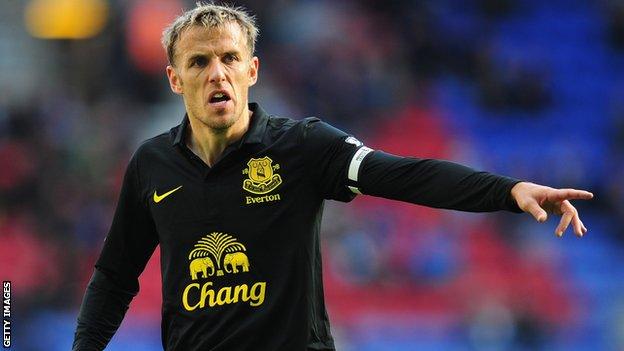 Everton captain Phil Neville has been ruled out for up to two months after undergoing a knee operation, manager David Moyes has revealed.

Neville missed his team's 2-1 defeat at Reading on Saturday after having surgery on Friday.

"We expect him to be missing for six to eight weeks," said Moyes afterwards.

Neville tweeted on Saturday: "Had my op yesterday. It went v well, I normally recover quick from these so hopefully back soon."

The former Manchester United and England player, 35, has been an influential figure during Everton's impressive start to the season.

But he will now miss a number of key games, including league matches against Arsenal (home) on 28 November, Manchester City (away) on 1 December and Chelsea (home) on 30 December

The Toffees started the weekend fourth in the Premier League table before slipping to fifth after only their second defeat in 21 top-flight games.

"We missed his leadership," added Moyes about Neville.

Moyes was critical of his side's finishing after a rare defeat against a Reading side that had not won a league game since winning promotion to the Premier League in May.

Everton, who took the lead through Steven Naismith before losing to Adam Le Fondre's second-half double, were denied a penalty when referee Martin Atkinson waved away appeals when Nikica Jelavic's shot appeared to strike the arm of Sean Morrison.

"I'm not angry with the referee, he should have given a penalty... but he doesn't give it," added Moyes.

"But I'm more angry with my team because we should have scored and it is up to us to do it. We didn't punish them and left the door slightly ajar for them to come in and they did do."