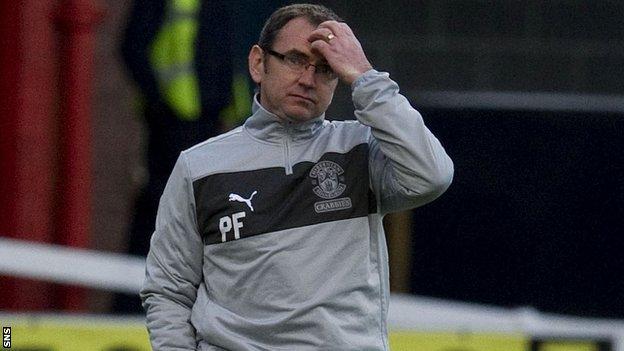 Manager Pat Fenlon was full of praise for Dundee after Hibernian fell to a surprise 3-1 defeat at Dens Park.

"We haven't been good enough today but we have to give Dundee credit, they were exceptional," said Fenlon as Hibs dropped from top spot in the SPL.

"They worked harder than we did and picked up a lot of second balls.

"It's disappointing but I don't want to be too critical of the players since they have been different class since the start of the season."

Dundee remain bottom of the table but have picked up seven points from their last three outings.

Kyle Bendedictus opened the scoring with a fantastic strike and Hibs fell further behind to second-half goals from Stevie Milne and Kevin McBride before Leigh Griffiths smashed in his 13th goal of the season for the visitors.

"We knew it was a difficult place to come because Dundee have had some decent results of late," added Fenlon.

"Maybe we thought we'd pick up the points because of the positions in the league but it's not like that.

"Every week you go into a game with a chance of winning or losing.

"We never really got going and that hasn't happened to us this season.

"We haven't had many off days and it was more down to how good Dundee were.

"We just need to pick ourselves up and prepare better for the next game."