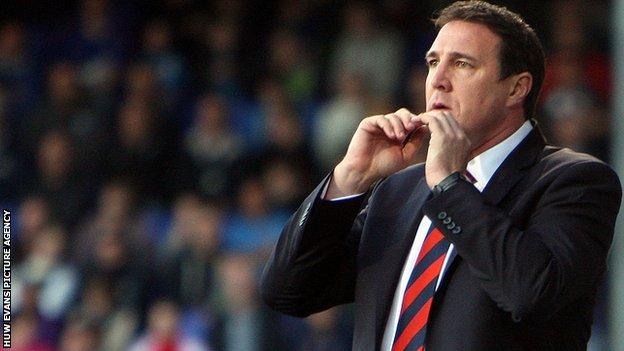 Malky Mackay has not ruled out adding to Cardiff's squad before the emergency loan deadline on Thursday.

Mackay's side are second in the Championship after a 1-0 win over Middlesbrough.

But injuries to Andrew Taylor, Ben Turner and Aron Gunnarsson could prompt Mackay to add to his squad.

"We'll have a look on Monday and have a look medically at the boys we've got and see where we might be light in the squad," he said.

"We'll decide because it will depend on who is available."

Matthew Connolly's 19th-minute header was the match-winner as Cardiff equalled a club record with a ninth successive home win at Cardiff City Stadium.

Defenders Turner and Taylor had to be substituted inside the opening half-hour with youngsters Ben Nugent and Joe Ralls thrown in at the deep end.

And in the second half Aron Gunnarsson was replaced by Craig Bellamy, who himself has recently been out with an ankle injury.

"One's a hamstring and one's a calf," Mackay said of the injuries suffered by Turner and Taylor. "Gunnarsson's was a back injury.

"We're just going to have to look and see over the next few days how they are. To have three [injuries] on the one day is very rare.

"But we've got [Kevin] McNaughton, [Don] Cowie and [Jordon] Mutch all beginning to come back.

"A little bit longer than that we've got [Stephen] McPhail and [Tommy] coming and we got [Craig] Bellamy back today. It's like anything, a couple out and a few back in."

Mackay praised the desire of his players following victory over promotion rivals Middlesbrough, which maintained their 100% home record.

"I'm delighted with the character of the team and the fact we kept another clean sheet at home." Mackay added.

"But that is no surprise to me because I see that from the players every day. To show that resilience against a good team showed the commitment to the cause and there are no egos at this club."