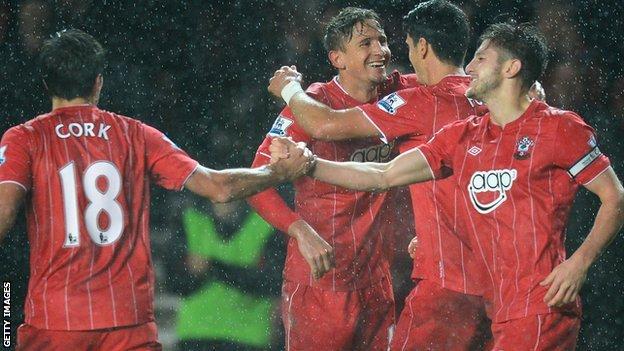 Southampton climbed out of the Premier League relegation zone as they convincingly beat Newcastle.

The livewire Gaston Ramirez squared the ball across for Adam Lallana to slot in the home side's opener.

Puncheon and team-mate Jose Fonte were denied by the woodwork as the home side ran out comfortable victors.

Saints substitute Jay Rodriguez also had an effort dubiously ruled out for offside in the closing stages of a match in which the two-goal scoreline flattered a Newcastle side who did not come close to matching the attacking verve and defensive durability of their hosts.

The home side earned back-to-back top flight wins for the first time this season as evidence mounted that they are acclimatising to the rigours of the Premier League following a tough start to the season.

In contrast, the manner of a third successive league defeat for the Magpies will worry manager Alan Pardew, who endured an unhappy return to his former club.

Pardew managed Southampton for 13 months before being sacked by the then League One club in August 2010 and, although he felt that decision was "harsh", there was nothing undeserved about his side's latest loss.

"This could have been a lot worse for Newcastle. Southampton were full value for their win, while Newcastle have lost three consecutive Premier League game for the first time since September 2008. This was Southampton's day."

Playmaker Ramirez was the inspiration for the home side's win along with captain Lallana and forward Rickie Lambert, who was signed by Pardew for Southampton.

The tone of the game was set early on when an overworked Newcastle keeper Tim Krul palmed away a 25-yard Ramirez free-kick and also had to block a strike from Puncheon.

A sweetly-struck long range Lambert free-kick cannoned off the corner of the goalframe before the home side's pressure finally told.

A Krul clearance only found home defender Nathaniel Clyne, whose long range effort to catch the keeper off his line was only partially headed away by Magpies centre-back Mike Williamson.

The menacing Ramirez latched on to the loose ball and crossed low for Lallana to tap in.

Newcastle briefly improved after the break and Anita should have done better than shoot too close to keeper Paulo Gazzaniga when clean through.

The miss was soon punished as Southampton extended their lead in lovely style. Lallana's backheel released Puncheon and his cross was only parried by Krul, which allowed Ramirez to force in a close range shot.

The home side were constantly scything through Newcastle in impressive style and went close to extending their lead on several occasions.

A Puncheon shot and Fonte header both hit the Newcastle woodwork while, thanks to a smart Gazzaniga save from Davide Santon's powerful header, Southampton also kept their first clean sheet of the league season to go with the three points.

"It was a good win. We created a lot of opportunities and their goalkeeper also made a lot of saves.

"It was a thoroughly deserved win and we kept a clean sheet as well. There is a growing maturity about the players. There is a momentum with us and we are playing some really good football consistently through a game.

"The standard of play, as individuals and as a team, is improving all the time."