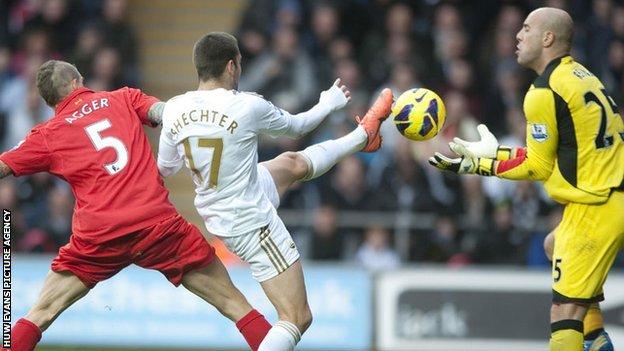 Brendan Rodgers was frustrated on his return to the Liberty Stadium as his Liverpool side were held to a draw by Swansea City in the Premier League.

Liverpool had Jose Enrique's close-range effort ruled out for offside, and Raheem Sterling hit the crossbar with a volley.

Swansea's best chance fell to Ashley Williams who saw a powerful header cleared off the line by Joe Allen.

The result lifts Swansea to eighth in the table with Liverpool 11th.

It was Liverpool's eighth successive game without defeat in the Premier League, while Swansea have lost just once in their last seven league outings.

The match also saw Swansea keep a clean sheet for the first time in 11 league matches.

Liverpool manager Rodgers was met with a mixture of applause and a few boos when he emerged from the tunnel in Swansea for the first time since leaving the Swans for Anfield in May.

His last match in charge of Swansea had been against Liverpool at the end of last season.

But the pre-match controversy surrounding Williams' comments about Luis Suarez in his autobiography appeared to be forgotten as the players smiled and shook hands before kick-off.

Swans captain Williams said in his book that he wanted to "knock out" Suarez during last season's game at Anfield and accused him of diving.

Liverpool had the better of the first half chances. Sterling hit the crossbar with a vicious right foot volley and Swans' goalkeeper Gerhard Tremmel saved well when Glen Johnson was clean through.

The Reds had the ball in the back of the net when Enrique stole in at the back post to slot the ball past Tremmel. But the goal was ruled out for a marginal offside.

Pepe Reina had a relatively quiet time in the Liverpool goal, but did have to save a sharp near-post shot by Wayne Routledge.

Swansea manager Michael Laudrup made a tactical change at the start of the second half, bringing South Korean international Ki Sung-yeung on for Itay Schechter.

That allowed Michu to move into the attack with Ki filling in the gap left in the Swans' midfield.

Williams sent a powerful header towards the Liverpool goal from a De Guzman corner, but saw his former team-mate Allen clear the ball off the line.

A Pablo Hernandez free-kick forced a fine save from Reina late on after Allen had fouled Ki on the edge of the box.

But Liverpool finished stronger, with Jonjo Shelvey forcing Tremmel into a save with a powerful drive from 20 yards in added time.

Liverpool manager Brendan Rodgerssaid of Enrique's disallowed goal: "I thought it was a goal to be honest.

"I understand that when you see it now and you see lots of replays and people talk about parts of the body being offside, but the only part of his body that looked offside was his arm.

"So I thought it was a wee bit harsh on us because he's come in, gambled on the ball coming in and he's got his reward for it, but unfortunately we didn't get the goal.

"I was very pleased with my team today, the method in our game was excellent. We had 18 shots at goal, nine on target, we just couldn't quite find the final touch to finish."

Swansea City manager Michael Laudrup said: "I think it was a good point.

"In the first half they had more chances than us but we had chances too and I am pleased with the performance.

"You know when you play against Suarez and Gerrard they can always invent something, but I think we handled it well.

"There has been a lot of talk about Suarez and Ashley [Williams] and today we saw two guys trying to do their best.

"Suarez did some good things, but maybe less than he is used to as he played against two guys who did very well."