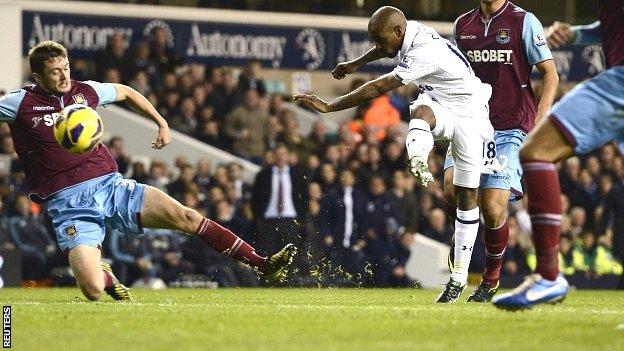 Gareth Bale hit the bar before Defoe opened the scoring with a superb run from the right and crunching finish.

After rattling the bar himself, Clint Dempsey found Bale in the box and he beat Jussi Jaaskelainen via a post.

Aaron Lennon broke free and squared for Defoe to seal the points, although Andy Carroll's header ended the Liverpool loanee's 15-game wait for a goal.

Unfortunately for Carroll and West Ham, who came close to further reducing the deficit late on, the effort was a mere consolation.

Tottenham are now unbeaten in their last 11 Premier League games against West Ham at White Hart Lane, a run stretching back to 1999

It means Tottenham climb above the Hammers into seventh, with Sam Allardyce's men facing a tough run of fixtures in December.

Spurs will be delighted to end a run of four straight domestic defeats and collect only their third win in 10 matches in all competitions.

Despite the poor results of late, Tottenham manager Andre Villas-Boas would have expected a return to form against a club who have not left White Hart Lane with maximum points since 1999.

Indeed, they began with the belief that victory was compulsory - dominating possession and getting forward in numbers.

Defoe had two early sighters before Bale spun Mark Noble and crashed a 20-yard drive against the woodwork.

But West Ham had conceded the third-fewest goals in the Premier League this season and, for a time, it was easy to see why.

Typically well-drilled by Allardyce, their defence, midfield and attack work in unison to grant opponents minimal time and space.

But an approach focusing so heavily on containment leaves little scope to attack and a team that has scored just five away goals this season did not once trouble Hugo Lloris in the first half.

While it was a fairly dour 45 minutes, if anyone deserved the opener it was Tottenham - and their reward arrived just before the break.

Defoe outmuscled Winston Reid and George McCartney on the right touchline before making his way inside, sidestepping Noble and sending a venomous finish past Jaaskelainen.

It was a moment of class the match badly needed and meant West Ham had to adopt a more positive approach in the second half.

They obliged when Kevin Nolan broke clear on right and sent in a low cross towards substitute Matt Jarvis, only for Lloris to gather well.

The problem with West Ham's greater ambition was that it left them exposed at the back, and Spurs took full advantage.

Dempsey - replacing the suspended Emmanuel Adebayor in support of Defoe - became increasingly influential and was unfortunate to see a strike come back off the bar.

Within a minute he was involved again, scooping a pass through for Bale who kept his balance and beat Jaaskelainen via a post.

Tottenham were now in total control and extended their lead when midfield pressure from Tom Huddlestone and Sandro allowed Dempsey to release Lennon, who squared for Defoe to tap home into an unguarded net.

Carroll managed to nod in Joey O'Brien's cross and West Ham pushed hard for a second, but Tottenham held on to their advantage and will be buoyed heading into Wednesday's visit of Liverpool.

"It was a good 90-minute performance, very solid, and we kept creating. It's difficult to defend long balls and crosses into box, but the boys did extremely well to handle the situation.

"We played two away games at top teams [Manchester City and Arsenal] and played well but didn't get the results we wanted. Getting back to winning ways was extremely important.

"Defoe is a great player in a great moment of form. His desire and hunger are immense. He works hard and lives off scoring. He's having a great season."

"It looked like we didn't recover from the first goal, which is disappointing because we still had a very good chance if we came out and played like we can. We were relying a lot on good defensive work and that let us down in the end.

"We launched a spirited comeback but it was far too late. It's a bad day for me watching the lads play like they did. None of the players played their best and ended up being beaten comfortably.

"Our goal provides a platform to the players to show where to put the ball. If they put it in the rights areas Andy Carroll will score and he showed that with his header. Hopefully he can get on a bit of a run."

99 comments
Back to top
unknown