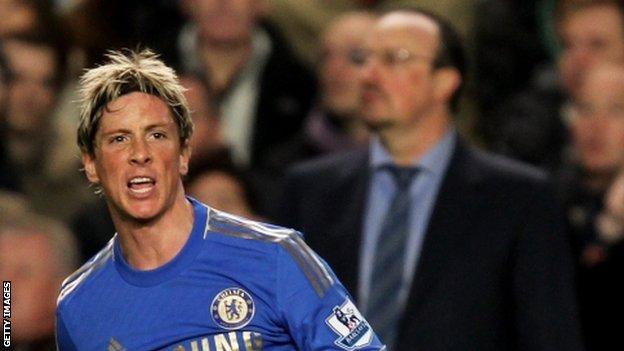 Benitez's arrival has met with an angry response from Chelsea fans in the wake of his old rivalry with them during his time at Anfield - and they made their strength of feeling abundantly clear.

The Spaniard was met with deafening jeers when he arrived in the technical area before kick-off, with the stadium announcer struggling to make himself heard ahead of a minute's applause for

The mediocre affair did little to lift spirits, with City, still unbeaten in the league, marginally the better side but unable to fashion the victory that would have taken them back above Manchester United at the top of the table.

"Neither side can say they really deserved to win this game. It felt like a 0-0 from the start, lots of effort, with some very good defending.

"The new Chelsea manager made exactly the same changes as the former manager would have made."

Benitez was left with plenty to ponder after the frosty response from his own fans, who directed abusive chants at him during the game and also delivered a minute's applause for Di Matteo after 16 minutes, in honour of the Italian who wore the number 16 shirt as a player.

And there was no instant revival for Fernando Torres as he struggled once more - although Benitez will be pleased with a clean sheet.

The antipathy directed towards Benitez continued throughout a subdued first half, with City creating what few opportunities there were.

David Silva headed off target from an inviting cross from Pablo Zabaleta, who saw a shot from the edge of the area blocked by Chelsea goalkeeper Petr Cech.

One of Benitez's priorities is to rekindle the fire in Torres and it was clear Chelsea's game had undergone a swift shift in emphasis, with an obvious increase in the number of long balls being hit towards the striker. On this occasion, though, it made life even easier for City captain Vincent Kompany.

Torres came to life on the hour when a loose ball fell in his direction in the area but he could only fire a rising left foot drive narrowly over the bar.

In a torrential downpour, moments of quality were scarce although Chelsea had an anxious moment as the game entered its final 10 minutes as Cech was forced to divert James Milner's cross with his legs.

Benitez had remained largely impassive but moved to question the fourth official when Ashley Cole's late shot was clearly turned over by City keeper Joe Hart only for referee Chris Foy to award a goal-kick.

It almost counted as a moment of high drama in a game that was, to put it politely, subdued and low key.

"Games here are always hard but we played well while missing the last pass. We were too soft when we arrived near the box, you can play well, like we did, and not win the game.

"We had the better chances, I think that we lost two points. We dominated the first half, but the second half was not quite like that.

"It was difficult for them [with the atmosphere about Rafael Benitez], but we played well. Last year we lost a good game, this year we took one point. I am not happy but I prefer this."