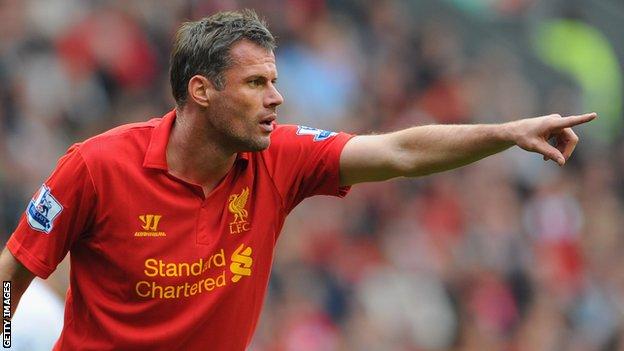 Liverpool defender Jamie Carragher believes the club could be playing in the Champions League next year with a top-four finish not out of reach.

After struggling early in the season, victory over Wigan left the Reds four points behind usual qualifiers Arsenal.

"We look as if we have not made a good start," the 34-year-old told BBC Radio 5 live's Sportsweek.

"But with winning on Saturday, we are not too far behind the top four. It is still up for grabs."

Surprise package West Brom, a team Liverpool lost 3-0 to on the opening day, currently sit in the final qualifying spot for Europe's top club competition, with 23 points - eight points ahead of the Merseyside club.

However 11th-placed Liverpool are now unbeaten in seven matches and Tottenham, who finished fourth last season, are now just two points ahead of them in the table after losing 5-2 to Arsenal this weekend.

Such results have given Carragher hope that Liverpool could make it to the Champions League for the first time since 2009-10.

"Beside the top two, and even Manchester United lost on Saturday, a lot of teams are dropping points all over the place," Carragher said.

"From our own point of view, we now want to kick on and make a challenge for that top four place because it seems that everyone is throwing it away."

Last season Liverpool finished 17 points behind Spurs and manager Kenny Dalglish was replaced by Rodgers in the summer.

The Northern Irishman's time at Anfield has been marked by his decision to select academy products such as Raheem Sterling, Suso and Andre Wisdom in place of his predecessor's expensive buys such as Stewart Downing, Jordan Henderson and Andy Carroll.

While Liverpool only took three points from their first five league fixtures, the turnaround in results since has seen them climb the table and led to Carragher praising his manager's approach.

"The owners have come in and looked at it and thought they want to bring in a new manager who will promote players from the academy, which he has done.

"I think it does take time to settle in. It was difficult to replace players like Maxi Rodriguez and Dirk Kuyt due to the financial situation in terms of us spending a lot of money in the last few years.

"[Rodgers] has been very brave putting young players in and giving them a chance. Hopefully, we'll see the benefit of that in the future," the centre-back said.