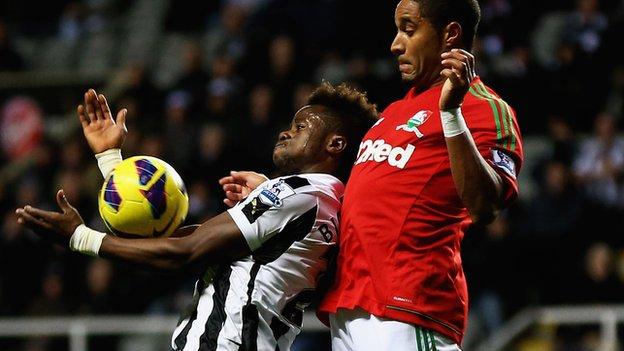 Swansea secured their first win over Newcastle in 32 years with a deserved 2-1 victory at St James' Park on Saturday.

Williams believes the Swans are finally flourishing under summer appointment Laudrup after an inconsistent start to the season.

"Things are shaping up nicely for us," Williams said.

"And as the season goes on we're understanding our roles a lot more and you can see the team really gelling.

"Obviously [with] a new manager everything changes so it takes a while. But anyone watching our games now can see we're not as unsure as we were at the start of the season.

"We know our roles and it's down to us to stick to them."

Second half goals from Michu and Jonathan de Guzman gave Swansea their fourth league win of the season at St James' Park.

Manager Laudrup, who was appointed manager in June following Brendan Rodgers' move to Liverpool, described the win at Newcastle as

"I think we deserved it," said Wales skipper Williams. "No one could have complained if we'd have scored three or four today.

"Picking up anything here would have been a good result so a win is a bonus for us."

After amassing four points from away games at Southampton and Newcastle, Swansea face two home games in quick succession.

Laudrup's side host Liverpool next Sunday and the following Wednesday West Bromwich Albion visit the Liberty Stadium where Swansea have lost only once so far this season.

"We've had two away games and we got four points so we can't ask much more than that," Williams added.

"We've got to build on it now and go and get some points at home."