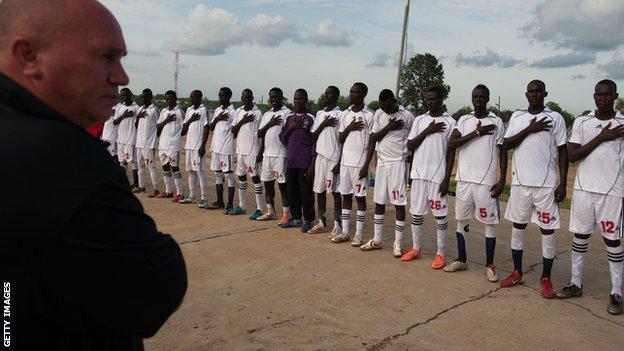 South Sudan's national team coach, Zoran Dorjdevic, is a worried man just a few days before his team makes their debut in the Cecafa Challenge Cup.

After being granted membership of Fifa earlier this year, South Sudan are struggling to prepare properly for their first senior competition.

They will face a tough test in Uganda, where they have been drawn against the hosts and defending Cecafa Challenge Cup champions, as well as Kenya and Ethiopia.

It is the same as bringing your soldiers into war without food, without proper weapons or uniforms.

Dorjdevic (pictured above) told BBC Sport in Juba on Saturday that he is not very comfortable going into the tournament because his team has barely trained or even had friendly matches.

"We are not in good shape at all, although the players are very excited going into the first tournament of this kind," added Dorjdevic, whose team held Uganda to a 2-2 home draw in a warm-up match in July.

He said it is high-time the government of South Sudan came to the rescue of the national team and provide equipment and facilities for training.

"We are already late and need to train for a few days," added the Serbian coach who admitted that most players are fit because the league has just concluded.

"The government should provide facilities as soon as possible to prepare our team. We shall go and participate without friendly games, which is not acceptable.

"It is the same as bringing your soldiers into war without food, without proper weapons or uniforms. How do you expect them to fight?"

Among some of the players included on the South Sudan team are Hilal Khartoum's goalkeeper Juma Genaro, together with Richard Justin and James Joseph who both netted in the draw against Uganda in July.

South Sudan will open the event on 24 November against Ethiopia, the region's only qualifiers for the 2013 Africa Cup of Nations.

The other teams taking part in the event include Sudan, Tanzania, Burundi, Somalia, Rwanda, Zanzibar, Eritrea and guest side Malawi.