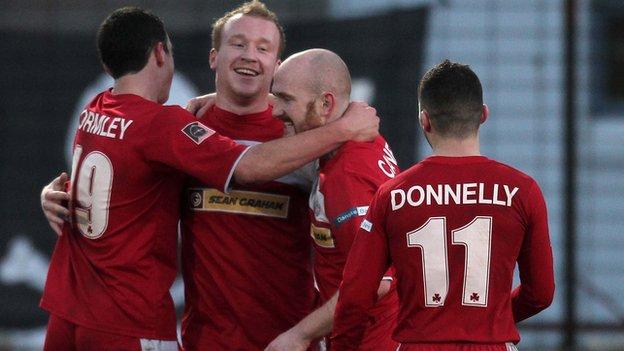 Can Cliftonville sustain their impressive start to the season and win a first title in 14 years? I don't doubt it.

The Reds are the most complete side in the Irish Premiership, scoring goals for fun these days and boasting a pretty mean defence too.

The statistics show that Tommy Breslin's trailblazers have only conceded more than one goal in a game this season on just two occasions - in a 3-2 victory at home to Portadown in September and a 3-1 defeat by rivals Crusaders in the north Belfast derby.

I covered that Seaview setback and it was probably the only time this season that the Reds did not perform for Breslin. But off days are extremely rare with Cliftonville.

Three defeats in their 20 domestic games so far makes the Reds look like the real deal.

Last season they were beaten 14 times in 47 domestic matches and memorably went on a 10-match unbeaten streak from early October through to 10 December.

So Breslin's record since he took over at Solitude from Eddie Patterson, initially in an interim capacity for the final six games of the 2010-11 season, is impressive.

If Cliftonville sent out a statement of intent by dismissing reigning champions Linfield 3-0, Saturday's eight-goal demolition of Glenn Ferguson's Ballymena United will have left their rivals in absolutely no doubt that this is a side on fire, and fully focused on securing the Gibson Cup in style.

The strike pairing of Liam Boyce and Joe Gormley has now delivered 29 goals and considering six players contributed to the goal haul at the Showgrounds, the Reds' potency in this department is one of their biggest strengths. Stephen Garrett, George McMullan, Diarmuid O'Carroll and Marty Donnelly are value assets here too.

And to think that Chris Scannell, provider of 18 goals last season, is a long-term injury absentee and Rory Donnelly, who weighed in with 17, is attempting to forge a cross-channel career with Swansea City.

But there is quality all round the side. The experience of Ronan Scannell at the back along with former Glentoran defender Jamie McGovern and the exciting 19-year-old ful-back Thomas Cosgrove and the versatile Barry Holland.

And alongside skipper McMullan, the midfield is bursting with talent. Former Crusaders winger Marty Donnelly, the enforcers Ryan Catney and Barry Johnston, and Ciaran Caldwell who is missing out through injury just now.

Landing keeper Conor Devlin is a signing that pleases Breslin considerably. A Northern Ireland Under-21 international, he had a spell at Old Trafford as a youth and has crammed a lot into his career already with spells at Aston Villa, Hartlepool and Brentford.

Marty Quinn, the man who guided Ireland's oldest club to their last title in 1998, watched them demolish the Blues and reckoned history might well repeat itself come April next year.

However, it might not come down to the last day this time. The current Cliftonville crop look perfectly capable of painting the town red long before the season ends.