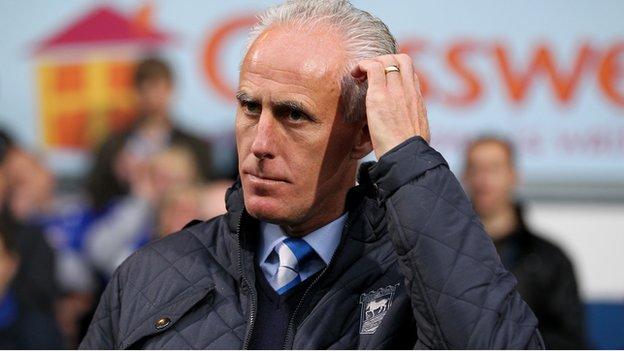 Town have won two and lost two of their four games with their two defeats seeing them concede 11 goals.

"It was awful. The manner in which we conceded the goals was embarrassing," he told BBC Radio Suffolk.

"I made changes to the back four and take my responsibility for that but it was very, very poor."

The defeat leaves Ipswich 22nd in the Championship, two points from safety.

McCarthy was disappointed that his side were unable to cause the Foxes, who had failed to win their last four games, any significant problems.

"We never laid a foot or a glove or a finger on them in terms of competing against them," he added.

"They are a good side. He's built a good squad and a good team there, but that shouldn't happen to us.

"[The players] will take responsibility with them. I said I've changed the team, picked other people but that was a milky, soft, timid performance and it's not words that are usually associated with my teams and I'll be endeavouring to make sure I'm not saying it again.

"When you get into those positions and almost become used to losing you've got to turn that attitude around, but how do you do it? Is it with the players we've got or new players? I can't change the whole lot of them.

"He was as culpable and responsible as anyone else," added the former Republic of Ireland manager. "I've said that to him. He knows that but he's an experienced guy - he'll be OK."