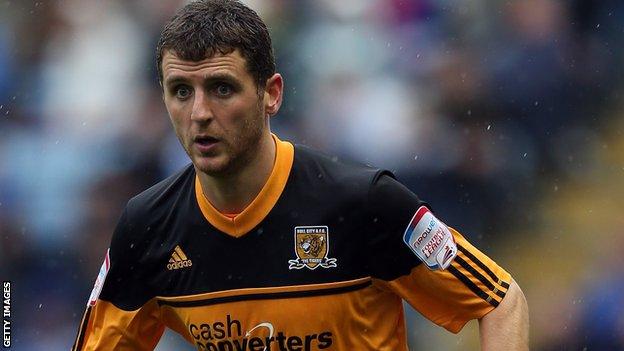 The Northern Ireland international, 28, joined the Championship club in July, following his release from Leeds.

And with Jack Hobbs sidelined through injury, Alex has been given a regular run in his father's team, making 15 appearances so far.

His mother deserves a pat on the back.

"It's difficult because of who his dad is, but out there he plays on merit," boss Bruce told BBC Radio Humberside.

"I knew when he was coming in to the building that it was going to be difficult for him but I think we actually missed him a bit at Cardiff.

"He's come in and done very well, especially with Hobbsy the way he is with his injury.

"At this level he was always going to be a no-brainer."

Alex played under his father during their time together at Birmingham City in 2005.

Since then, the defender has had stints with Ipswich, Huddersfield, Sheffield Wednesday, Leicester, Tranmere and Oldham.

Hull currently sit fourth in the Championship table, four points off the automatic promotion places, and secured their fourth win in five games against Birmingham on Saturday.

And Bruce reserved praise for his son's performance against their former club.

"I thought he had his best game for us," he said. "In the second half when we came under the cosh some of his heading ability was terrific.

"His mother deserves a pat on the back."