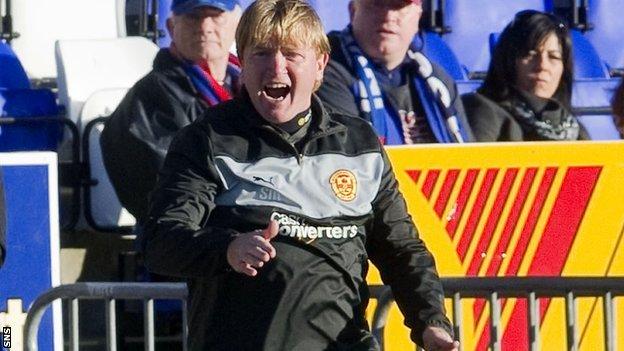 Manager Stuart McCall felt was the sort of performance that they have been promising to deliver in recent weeks.

Michael Higdon, Jamie Murphy, Adam Cummins, Henrik Ojamaa and Omar Daley were on target for the Steelmen in a comprehensive away win.

"We've been threatening that. Today everything came off," a delighted McCall told BBC Scotland.

"We've got good players middle to front and we can cause teams problems."

With only five points from a possible 21 in their previous seven Scottish Premier League matches, the margin of Motherwell's win may come as a surprise to most, but not to the Fir Park boss.

"The results of late haven't been great but the performances have been good, I've been saying that all along," he added.

"To limit Caley to a few efforts - they are top scorers in the league - and come away and score five against the form team is fantastic.

"They are going well, Inverness. They are always a threat. They were 2-0 down at Hibs, 2-0 down at Hearts, they stick at it, but I felt today our forward play was very good and we got the goals at the right times.

"Occasionally you get a blip and they were off their game today and we were on top of ours.

"I felt all game we were a threat. We could have scored more, on the break we had lots of opportunities.

"We are delighted with the outcome."

The victory lifted Motherwell to fourth in a tight SPL table but Inverness blew the chance to move into third spot.

With the goals spread liberally around his team, McCall had many reasons to be pleased, but he highlighted the role of two midfielders in allowing players like Murphy and Ojamaa to perform, as being instrumental to the victory.

"What a good player he is," said McCall of Nicky Law.

"He is playing in a midfield two with [Keith] Lasley, who I thought covered a lot of ground.

"Lasley is developing his game, he is more the holding man and he lets other players go and play.

"We've got good options and I'm delighted for the players."