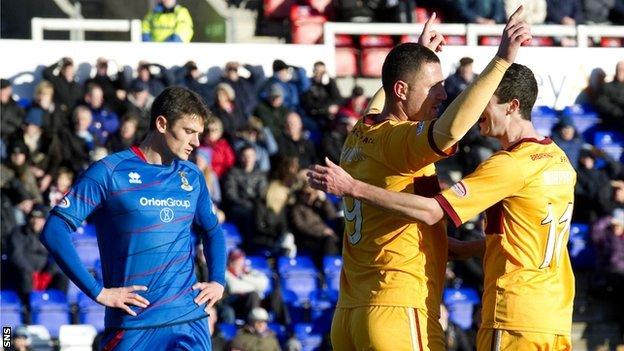 Terry Butcher refused to slam his Inverness players after a dismal home performance against Motherwell led to a 5-1 Scottish Premier League thrashing.

"It was massively disappointing. We just didn't get going from the first whistle," said the Inverness manager.

"I didn't go mad at the players. In fact, I had a bit of a laugh and a joke with them.

"They are a great bunch of guys but today it was like a team of strangers turned up. We weren't at the races."

Unbeaten in 10 games - their last defeat was by Motherwell on 2 September - Caley Thistle went into the match seeking the three points that would take them to third in the table.

But they were two goals down after 21 minutes as Motherwell's dominance was underlined by a header from Michael Higdon and a Jamie Murphy volley.

Richie Foran pulled one back for Inverness a minute into the second half, before Adam Cummins, Henrik Ojamaa and Omar Daley added to Motherwell's tally.

The margin of Inverness's defeat means they drop to seventh.

"The last 10 games we have been miles and miles better than that," said the former England captain.

"Not one player can say, 'I did my job today and I did it well'.

"We got back into the game at 2-1. We could easily have been out of the game at half-time. We always score but if you concede five and you only score one, you get a bit of a doing.

"We were beaten by a very good Motherwell side.

"Get the DVD, throw it in the bin and move on from there."

Butcher must now lift his players for a trio of league games away to Celtic, Aberdeen and Ross County.

"I could still be in the dressing room on Tuesday going through every player's mistakes but there's no point dwelling on that," added Butcher.

"We are a positive club and we want to move forward together, which we'll do, and we'll work hard on Tuesday and for the rest of the week and make sure we are ready for Celtic."