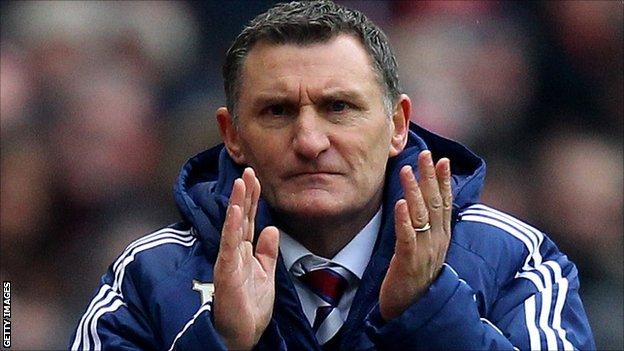 Tony Mowbray has said Middlesbrough should not be too disappointed after slipping to a 1-0 defeat by Championship promotion rivals Cardiff.

The loss ended Boro's run of nine games undefeated and saw the Bluebirds leapfrog the Teessiders into second.

"We can take confidence from the way we performed against a team that have beaten everyone at home this year," Mowbray told BBC Tees.

"I'm sure the people of Cardiff will know they've played a decent side."

"I feel for the players a bit because we put a fabulous effort in today and really got a grip of the game, really looked a good side at times but we didn't get a reward."

Boro's run comes to an end

Boro had five shots on target to the Bluebirds' one, but could find no way past goalkeeper David Marshall.

Emanuel Ledesma, who struck the crossbar, and Scott McDonald were behind some of Boro's best chances, after Matthew Connolly's header gave Cardiff an 18th minute lead.

"I'm heartened, I enjoyed watching the team, in the second half with the way we played, the way we moved the ball," Mowbray continued.

"No team goes through the season without defeats. You've got to take it on the chin, set ourselves some targets and go on another unbeaten run."

Meanwhile there was a further sour note with defender George Friend and Faris Haroun added to the injury list at the Riverside, while Jonathan Woodgate was forced out of the game before kick-off with a calf strain.

"He's done his hamstring, which is a disappointment for us, while Faris has done his calf," Mowbray said.