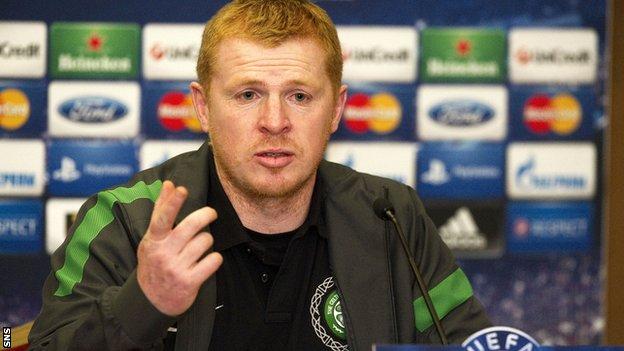 Celtic will visit the scene of their greatest triumph as manager Neil Lennon tries to inspire his players to beat Benfica in the Champions League.

The squad will train at the Estadio Nacional on Tuesday morning, the venue for the club's European Cup final win over Inter Milan 45 years ago.

Lennon said: "1967 is a pivotal day in our history and we all aspire to reach those heights again."

A win for Celtic will guarantee them a place in the last 16 of the tournament.

We will try to play as we always do, to try to win the game and we will see what that brings

Indeed, a score draw would be enough for Celtic to progress from Group G if Barcelona beat Spartak Moscow.

After their thrilling win over Barcelona in Glasgow, the Scottish champions are on seven points after four matches, two behind the Catalans but three ahead of Tuesday's opponents Benfica and four ahead of Spartak Moscow.

Several of the club's Lisbon Lions were on the official flight from Glasgow, as was the famous trophy, which took up two seats at the back of the plane.

"The Lisbon Lions are a very special team, a unique bunch of men in the history of the club, and it is very poignant that we are playing in Lisbon," said Lennon ahead of the match.

"We will train at the stadium in the morning and let these current players get a feel of what is a special piece of history for our club.

At the club's media conference, Lennon said the fitness of Gary Hooper, Joe Ledley and Scott Brown will be assessed during a training session on Monday evening, but he said he was "confident all three should be in contention" to play.

"Kris had a dead leg and is feeling a lot better," he said.

"It was just fatigue with Sami. He is fine."

With two Group G games remaining, the Celtic boss feels the match at the Stadium of Light will be "as tough as Barcelona, if not tougher".

"We might get two bites of the cherry but we would like to do it at the first time of asking.

"Benfica are formidable team at home and their domestic form is excellent, and they, like ourselves, go into the game on the back of a very good win.

"Against Benfica in the corresponding fixture 10 of our players made their Champions League debut so they have done very well.

"If we didn't [qualify] then it might be an opportunity missed but I am not thinking of that.

"I am not going to set the team up defensively or play for a draw, we will try to play as we always do, to try to win the game and we will see what that brings.

"But the players are in confident mood."