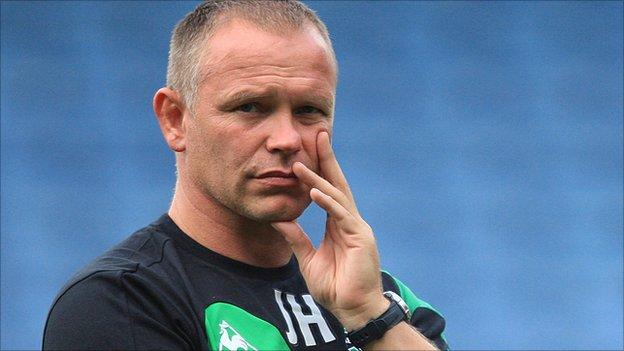 First-team coach John Hughes has said the enthusiasm shown by younger members of the Hartlepool squad can help reignite their season.

Pools are without a win in 17 games and Hughes, who at Victoria Park, is tasked with lifting the club off the foot of League One.

"They don't need to have much to say, they need to inspire with their performances," Hughes told BBC Tees.

"Sometimes that inspires one or two around you. If they do I'll be happy."

Hughes has inherited a youthful squad with Jack Baldwin, Darren Holden and Nathan Buddle in defence, Jonathan Franks, Greg Rutherford and Jordan Richards in midfield, plus loanees Charlie Wyke and Ryan Noble among those aged 22 or under.

The new boss suffered a 5-0 in his first match in charge - the fourth time this season five or more goals have been conceded in a single fixture.

However, the former Hibernian and Falkirk boss is determined to arrest the slump, starting with the visit of fellow strugglers Oldham Athletic on Tuesday.

"I'm looking for improvement and, if the next time I'm talking to you, you say to me 'I know where the team is going' - then I'm doing my job.

"Hopefully if we're doing that results will come with it and, if that's the case, we can put a bit of pride back into this club."