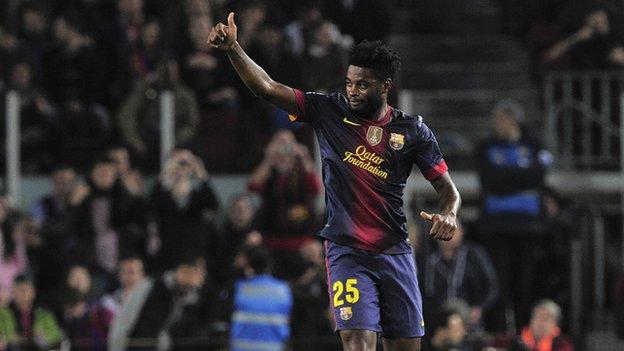 Cameroon midfielder Alex Song found the back of the net for the first time in La Liga to help Barcelona defeat Real Zaragoza 3-1 to stay at the top of the table.

Levante climbed to fourth position thanks to their 2-0 victory over Deportivo la Coruna, who missed a penalty, as both sides had a player sent off. The Nigeria striker Obafemi Martins scored the opener in the 40th minute taking his tally to five goals in eight games.

Granddi N'Goyi gave Troyes the lead in the 20th minute as his side shared the points with Nancy after a 3-3 draw. It was the first Ligue 1 goal for the Democratic Republic of Congo midfielder.

The Ivory Coast striker Max-Alain Gradel gave Saint Etienne a 2-0 lead against Evian in the first half an hour, but his side lost their advantage as both teams settled for a 2-2 draw. Evian's first goal came through the Ghana midfielder Mohammed Rabiu, who was on target for the first time.

Guinea striker Larsen Toure scored a goal in each half for Brest who beat Bastia 3-0.

Tunisia's Jamel Saihi was sent off for the second time this season as his side, league holders Montpellier, drew 1-1 at Valenciennes.

Zambia striker Jacob Mulenga found the back of the net for the fifth time when he equalised for Utrecht in the 17th minute in the 1-1 draw with Twente.

Also with five goals is the Cameroon midfielder Willie Overtoom who was among the scorers for Heracles in the 5-1 triumph over Roda JC. Overtoom scored from the penalty spot in the 58th minute.

Fenerbahce dropped points again this weekend after drawing 1-1 with Eskisehirspor, although Senegal striker Moussa Sow was on target with a 57th minute equaliser.

Nigeria striker Isaac Promise drew level for Antalyaspor after they had conceded their first goal in the eight-goal thriller against Besiktas. Senegal striker Lamine Diarra pulled a goal back later for Antalya but his side lost 5-3 at the end of the day.

Cameroonian striker Christian Pouga pulled a late goal back for Leuven who were beaten 3-1 at home by Mons.

Nigeria striker Michael Uchebo came on as a substitute in the 72nd minute to seal the game for Cercle Bruges, who beat Genk 3-1.

Nigeria striker Ahmed Musa continued his rich vein of form as he scored again for CSKA Moscow, helping them to beat Amkar Perm 3-0. Musa has now scored eight goals as CSKA lead the table by five points ahead of Anzhi Makhachkala.

Senegal striker Ibrahima Balde was among the scorers for Kuban Krasnodar who beat Mordovia Saransk 3-0.