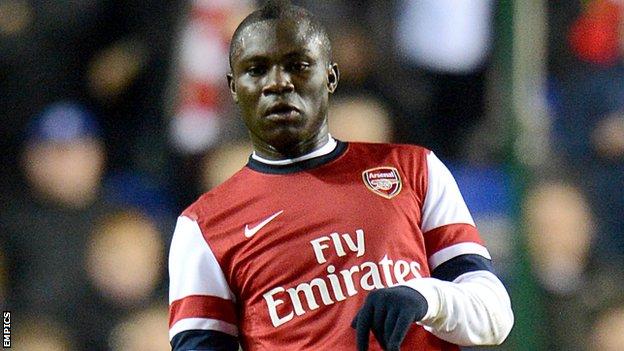 Addicks manager Chris Powell said the club had been watching the combative Ghana-born 20-year-old for some time.

"With the busy Christmas period to come, I felt it was right to make sure we are covered in all areas," he added.

Frimpong recently returned to full fitness after rupturing a cruciate ligament during a loan spell with Wolves in February.

A graduate of Arsenal's youth academy, he made his debut for the club against Newcastle United in August 2011 and went on to make 14 appearances for Arsene Wenger's team before Christmas.

However, he was then allowed out on loan with fellow Premier League side Wolves, only to suffer the knee problem against Queens Park Rangers in his fifth match for the club, an injury similar to one he previously suffered in 2010.

Frimpong has featured twice for the Gunners this season, playing in a 6-1 Capital One Cup victory against Coventry City and the extraordinary 7-5 comeback win against Reading in the same competition at the end of last month.