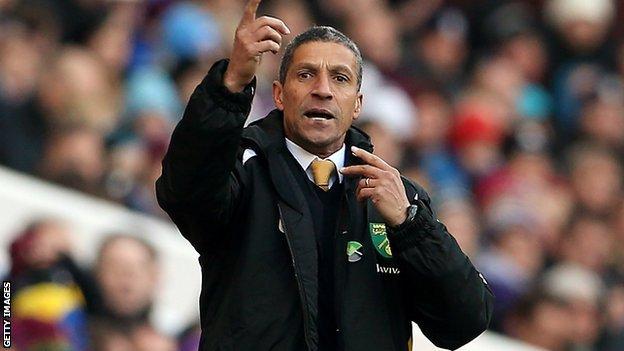 Norwich boss Chris Hughton has told his side to keep showing their fighting spirit for the rest of the season after the 1-0 win over Manchester United.

followed a run of home wins against Stoke, Tottenham and Arsenal.

"It's been a wonderful time for us, but we have to be like that every game," Hughton told BBC Radio Norfolk.

"We don't have the qualities the top teams have. We have to battle for everything we get."

It extended their unbeaten run in the Premier League to five games - after failing to win any of their first seven - and lifted them to 13th place, five points clear of the relegation zone.

"If we're able to put in these types of performances then we'll get more wins than we had at the start of the season," said Hughton.

"There's a feel good factor in the dressing room - but we need to be like that week in week out."

The goal was Pilkington's first of the season, after scoring eight last term, and capped a performance that drew praise from his boss, but also an expectancy for him to find the net more often.

"It's probably about time. With the quality Pilkington's got, he is somebody that should be chipping in with goals," added the former Newcastle and Birmingham boss.

"He is a threat when he gets in that final third. It was a really excellent header. I don't think the goalkeeper had much of a chance."