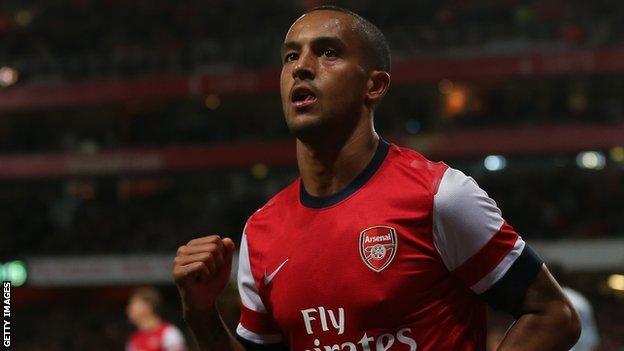 Arsene Wenger admits Arsenal are taking a "risk" by not selling Theo Walcott, who is out of contract next summer.

Talks over a new deal have stalled but Wenger insists the Gunners must not sell Walcott in the January transfer window, even if he leaves on a free transfer at the end of the season.

"There's a risk, yes, but that we are ready to take," said Wenger.

Walcott, 23, would be free to sign a pre-contract agreement with another club in January if a new deal is not agreed.

But Wenger is adamant the player, who has been ruled out of Arsenal's Champions League game with Montpellier on Wednesday with a shoulder injury, will not leave the club before the end of the season.

"A successful season is more important for us than this risk that is only a financial risk, apart from the losing the player," added the Arsenal manager.

"If we sell him, we lose him anyway.

"What is important is what we achieve together for the season. I just think that Theo is a big part in that."

Walcott rejected a five-year deal worth £75,000 a week in August, and has indicated his future may rest on whether he plays in a striking role.

The England international has scored nine goals from 17 appearances from his position on the wing for Arsenal this season and is the club's leading scorer.

Wenger, who says Walcott must be patient in his demands to switch from winger to striker, remains confident a new contract can be agreed with the midfielder, who joined Arsenal from Southampton in 2006 for £12.5m.

"We continue in a positive way. I told you many times we have until the end of December to sort this out," Wenger added.

Walcott's Arsenal and England team-mate Jack Wilshere says he does not want to see another big-name player quit Emirates Stadium.