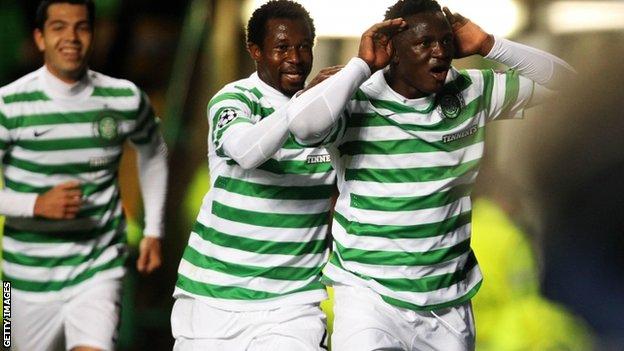 The romantics already have the script written. Celtic are in Lisbon, that hallowed city for the club, aiming for more European glory.

Reaching the last 16 of the Champions League can never compare to lifting the European Cup in 1967, but in today's football world, it would be a terrific achievement.

To be able to do it with a game to spare would be all the more creditable.

Three points against Benfica would guarantee Celtic's progress, while a score-draw might do, depending on the outcome of Barcelona's match in Moscow against Spartak.

Even a defeat is not disastrous, though it would put Benfica ahead of Celtic on head-to-head results.

But Celtic would know they could still qualify as long as they took more points in the final match at home to Spartak than Benfica do in Camp Nou.

That is for the future though and Neil Lennon's side do not come to Portugal contemplating defeat.

Instead, their performances away from home in Europe this season give them great hope they can achieve their goal of qualification.

Victories in Helsinki and Helsingborgs set the tone, but it was the win in Moscow against a much-fancied Spartak (albeit against 10 men) that really instilled belief into a squad that before this season was short on European experience.

Interestingly, Lennon has resisted the temptation to pack his midfield and play with an isolated striker, even in Barcelona.

So while they have played counter-attacking football, they have had more out-balls than just Gary Hooper; with Georgios Samaras, James Forrest and Kris Commons at different times offering respite to an under-the-cosh defence.

Expect more of the same against Benfica, who must win to keep their faint hopes of qualification alive.

Lennon says he anticipates this being Celtic's most difficult game yet in Group G, because of that onus on the home side.

But Celtic can at least expect to have more of the ball than they did in Barcelona and, therefore, more opportunity to create their own scoring chances.

Celtic's greatest threat in the campaign so far has been from set-pieces and through good deliveries from wide areas on pacey counter-attacks.

Barcelona manager Tito Vilanova identified that but his team failed to deal with it: Benfica will have to do better.

They looked a shadow of previous Benfica sides at Celtic Park, in a match a less tentative home side could have won.

While Benfica will assuredly be a more dangerous outfit on Tuesday night, Celtic can approach the game with no inferiority complex.