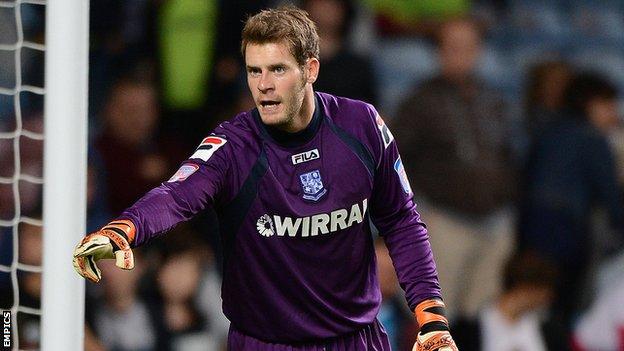 Tranmere's Owain Fôn Williams has said he was proud to receive the backing of his goalkeeping hero, Neville Southall.

The 25-year-old told BBC Radio Merseyside: "I was a bit speechless.

"He's an idol of mine and someone I looked up to playing for Wales and Everton. He's a legend and was the best in the world at one point."

Fôn Williams continued: "I can't thank him enough. For someone like him to comment like he did about myself is a real honour and I'm grateful for what he said.

You can't get a better compliment for Owain Fôn Williams than being picked by Ronnie Moore.

"I guess it's the keeper's union in a way. It never dies. But it's really good that he's keeping an eye on League One and not just the Premier League. Some people can be blind to the other leagues, but we're top of the league and it's not because of luck."

Wolves keeper Hennessey was closing in on a first-team comeback, which is likely to keep him out of action for the remainder of the season.

And Southall, who played 92 times for Wales, is convinced that Fôn Williams can make the step up from League One to international level.

"If he's playing for Ronnie Moore at Tranmere and he's doing well, that's good enough for me," he said.

"Ronnie knows his goalkeepers and knows his players. You can't get a better compliment for Owain Fôn Williams than being picked by Ronnie Moore.

"I think that's great for him. Maybe his time is now."

Fôn Williams, a member of several Wales squads without winning a first senior cap, has been in sparkling form for the League One leaders this season.

He has kept nine clean sheets in 22 appearances in all competitions.