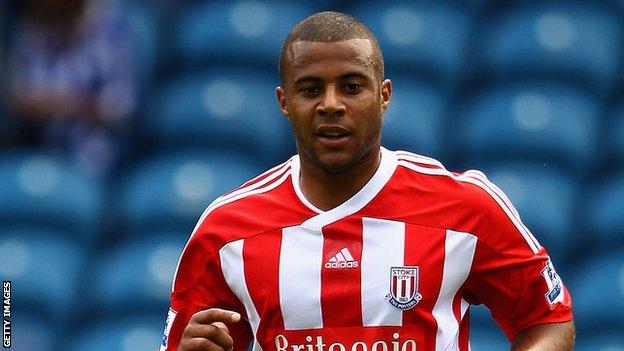 Tom Soares is hopeful of earning a permanent deal at Bury after confirming he is playing for the club for nothing.

Soares, who was released by Stoke City in the summer, on 9 November.

"It's not about the money at the moment. It's just about me getting back playing football and enjoying it again," he told BBC Radio Manchester.

Midfielder Soares on Saturday, playing 74 minutes in a 2-0 defeat.

"It's been difficult being out of the game, but it's good to be back," he continued. "I've been trying to get a team, but sometimes these things are difficult.

"I'm just taking every day as it comes. The manager [Kevin Blackwell] gave me a chance to play on Saturday. I'll just keep going into training and working hard, and hopefully I'll get something sorted."

Soares began his career at Crystal Palace and impressed during their most recent season in the top flight, making 22 Premier League appearances during the 2004-05 campaign.

He remained at Selhurst Park until the summer of 2008, when promoted Stoke paid £1.25m for his services.

In a frustrating four-year spell at the Britannia Stadium, Soares played just 12 times for the Potters and was sent out on loan to three different clubs.

Blackwell, who was before becoming Bury manager in September, says other players should take notice of the sacrifices that Soares has made to get back into football.

"That's the state of the game at the moment," said the Bury boss. "There are so many decent lads and good lads out of the game.

"Players that have got a contract must think themselves very lucky and they've got to work hard to maintain that contract."

At the age of 26, Soares has plenty of time to resurrect his career and he is confident of doing so.

"Every player wants to play in the best league and that's the Premier League," he added. "Hopefully I'll be back there some day."