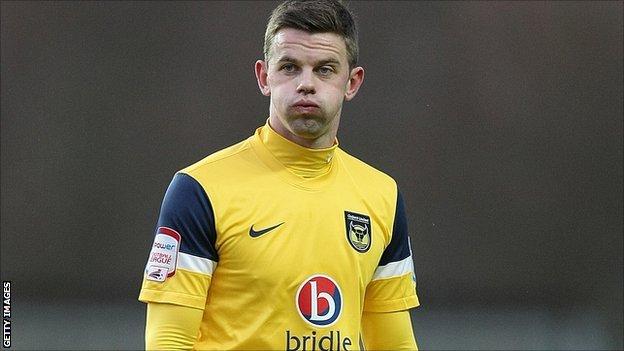 Oxford boss Chris Wilder has confirmed that strikers Tom Craddock and Deane Smalley will both be out for a month.

The U's have been hampered by injuries all season but were nearing a fully-fit squad before the double blow.

Craddock, 26, has cracked a rib, while 24-year-old Smalley has had an operation on an abductor muscle, with the pair both expected to be missing for around four weeks.

"These things don't help us, but we have to get on with it," said Wilder.

Injuries have smashed us for possibly coming up to a year. We need to get our best players fit and out on the pitch and not in the stands

Craddock in particular is a major blow for the U's after he was recently nominated for League Two player of the month.

He is Oxford's top scorer this season with 10 goals, while Smalley has three strikes to his name.

"Injuries have smashed us for possibly coming up to a year," added Wilder on BBC Radio Oxford.

"We need to get our best players fit and out on the pitch and not in the stands."

The injuries come at a bad time for Wilder, with his side now 18th in League Two following their 2-1 defeat by Chesterfield at the weekend.

But the U's boss says there is no point in the side feeling sorry for themselves and has urged them to turn things around against Barnet on Tuesday.

"We've got to shake ourselves out of it and we've got a game straight away to get it out of our system," he said.

"We want to go there and get three points, but we have to earn the right to play and get the right result."

Wilder added: "I'm disappointed and gutted but I am the leader of the group so I have to put on a brave face, stick my chin out and do my best for the football club.

"There is a thin dividing line in this league and we have to dust ourselves down and show our character.

"We've had ups and downs and this is a down period and hopefully we change the cycle and go forward again as we know the league position is not good enough for the standard we have set."