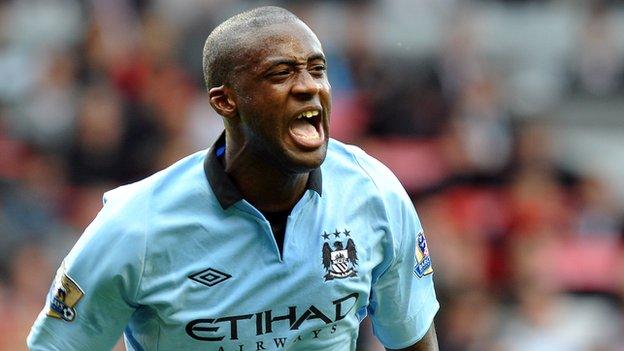 Having helped Manchester City win their first trophy in 35 years by scoring the only goal in the 2011 FA Cup final at Wembley, Yaya Toure was then outstanding the following season as City were crowned Premier League champions for the first time.

The powerful Ivory Coast midfielder was instrumental in City's success as the club ended their 44-year wait for a league championship title.

Toure's stellar performances, which combined his trademark driving runs, speed and immense physical attributes, enabled City to dominate the midfield and sweep all before them.

And when the Sky Blues stuttered in the title run-in, Toure was magnificent as City beat their biggest rivals Manchester United and then scored twice against Newcastle in the penultimate match of the season to put his side top of the table on goal difference - the margin by which they would clinch the title.

The league winners' medal was the latest haul of silverware for the 29-year-old, adding to the European Champions League, European Super Cup, Fifa Club World Cup, two Spanish league titles and Copa del Rey medal he won with Barcelona, and the Greek league title he earned with Olympiakos.

Toure, who won the Confederation of African Football's 2011 African Player of the Year award, has started this season in strong style.

He scored in City's Community Shield victory over Chelsea and has hit another four goals in the Premier League.

In January he will begin his quest with Ivory Coast to win the Africa Cup of Nations and try to cap what has already been a glittering career.