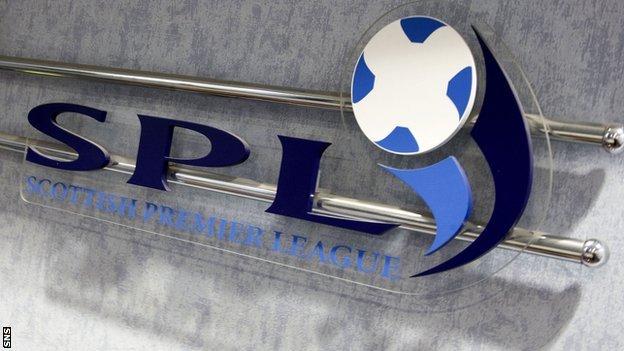 Scottish Premier League clubs say they have unanimously agreed to pursue an expansion of the top flight.

Representatives of all 12 clubs met at Hampden to discuss reconstruction, in response to recent proposals from the Scottish Football League.

SPL clubs will meet again on 3 December to debate the matter further.

BBC Scotland revealed at the weekend that the SPL was considering the creation of two divisions of 12 with an extended play-off system.

And the SPL would like to see the changes in place for the start of next season.

However, chief executive Neil Doncaster was at pains to stress that it was not a mechanism for hastening Rangers' rise from Division Three.

"It has to be a meritocracy," he told BBC Scotland. "There will be no false promotion or special treatment for any club."

Those attending the Hampden gathering chose not to divulge any details of the proposals, saying only that it would address the financial disparity between the top tier and the second tier, have a new model of fiscal distribution and reduce the number of games where nothing is at stake.

"What's important is that we have a structure that ensures there are no meaningless mid-table matches," added Doncaster.

"We want something to play for at all stages of the season.

"And we want a financial distribution model that means even though you may suffer the sporting penalty of relegation you don't have to suffer a crippling financial penalty at the same time."

It is understood the two division set-up being explored would see the top league stick with 12 teams but split after two rounds of fixtures in which teams had met home and away.

The top eight clubs would then meet a further twice home and away, while the bottom four clubs would play against the top four of the new lower division of 12, made up of teams invited from the SFL.

The SFL have been discussing a new way forward that would see a top tier of 16 teams, which Doncaster dismissed as "unworkable".

"It's for the SFL to decide what's best for them," said Doncaster, who explained that SPL clubs think that a 16-team league would create too many meaningless matches and the reduced number of fixtures would damage finances.

"We have a responsibility to the 12 clubs in the top tier but we also have a wider responsibility to all full-time clubs and those that aspire to be full-time. Equally, recognising that we also drive the income that supports other clubs lower down the divisions.

"And that responsibility will continue."

The concept of an "SPL2" has long been mooted, with SFL clubs voting 22 to eight against further talks on teams joining a new second tier in 2007, while SPL clubs could not agree on plans for a two-tier system featuring a top flight of 10 last year.

At present, no SFL clubs have been contacted to see whether they favour the latest blueprint for change.