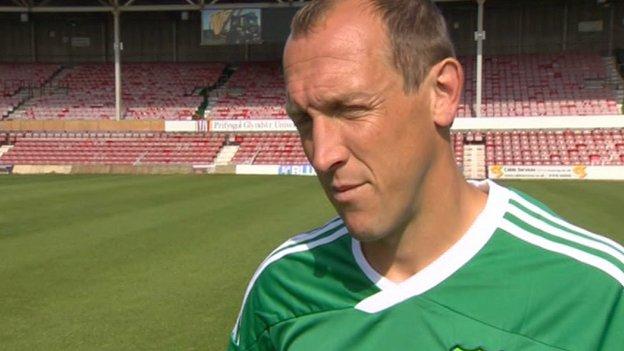 Andy Morrell has said he is keen to add to Wrexham's squad before the emergency loan deadline on Thursday.

Midfield reinforcements are Morrell's priority but the player-manager would not be too disappointed if he failed to bring players in.

Wrexham visit Braintree for a re-arranged game in the Blue Square Bet Premier on Tuesday.

"We've had a chat to a few people and we'll see what we can do," Morrell said.

"If not I'm fairly happy with what we've got. We've got enough strikers.

"Probably midfield is the one [area] that we probably just need a little bit of strength in. We're still on the look out and we'll take it from there.

Wrexham will join Grimsby and Newport County at the top of the Blue Square Bet Premier if they win their game in hand at Braintree on Tuesday night.

The Dragons drew 1-1 at home to Gateshead last Saturday after losing to Hereford United in their previous match and Morrell was happy with his side's improved performance.

"We've had a tough spell but hopefully Saturday has given the lads a bit of confidence going into a tough game away at Braintree," added Morrell.

"Our performance on Saturday was a lot better than it has been over the last couple of games.

"We're looking now to take that on into the next few games and go on an unbeaten run to keep us up there in it.

"We've lost the least amount of games in the league compared to everybody else so we want to win football matches."