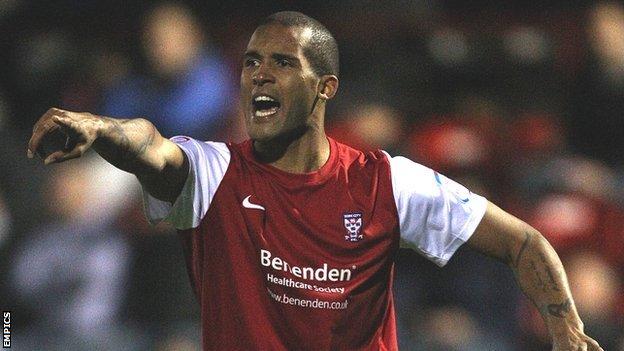 Northampton Town have signed York City defender Clarke Carlisle on loan until January, at which point he will agree a permanent contract at Sixfields.

I am 100% committed to my day job. If it ever affected me in a negative way Aidy will be the first to pull me up

The 33-year-old has played 14 times for York this season, but his Bootham Crescent deal expires in the new year.

He made 18 appearances for the Cobblers last term during a loan stint from Burnley, helping them avoid relegation.

The former QPR centre-half, who only joined the Minstermen in the summer, said: "Aidy offered me a contract from January moving forward. Gary Mills [York boss] has helped expedite that.

"I don't think it's odd. I said to Gary, 'please don't question my commitment and effort'.

"I'll still give my all in the meantime. He said he now needs to make plans for the rest of the season and it will be better for him to do that now moving forward."

Carlisle, who is chairman of the Professional Footballers' Association, almost joined Northampton before the start of the season.

"I spoke to Aidy in the summer about joining then," he said. "But I left it far too long. I considered retiring and left it too late."

Carlisle has become an increasingly public figure recently, appearing in the media in his role as PFA chairman and offering

But he has insisted he is eager to continue his playing career.

"Football is first and foremost," he said. "I am 100% committed to my day job. If it ever affected me in a negative way Aidy will be the first to pull me up on it."