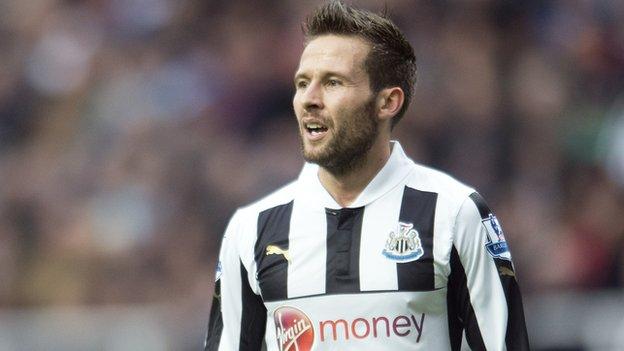 Newcastle United duo Yohan Cabaye and Steven Taylor have been ruled out until February because of injury.

Midfielder Cabaye, 26 has not played since 11 November and is to undergo a second operation on his damaged groin.

Centre-back Taylor, 26, is out after picking up a hamstring injury in the defeat at Southampton on Sunday.

Since signing from Lille for £4.8m in July 2011, Yohan Cabaye has scored six times in 44 Premier League appearances for Newcastle.

"He's cursing his luck a little, but unfortunately for Steven, his record is that he does pick up injuries," said Magpies manager Alan Pardew.

"Maybe the fact that we have had to call upon him more than perhaps we would like with the injuries and Colo's [Fabricio Coloccini's] suspension has probably compounded the issue."

Newcastle currently have 11 senior players sidelined and Pardew says he is concerned at his team's form after one league point from the last 12.

Cabaye suffered his injury playing for France and, if Ivory Coast midfielder Cheick Tiote is involved in the 2013 African Cup of Nations, Pardew will be without two of his key players in January.

"He's [Cabaye] had one side of his groin done and that caused a potential weakness in the other side, so that needs to be done," added Pardew.

"That will be done, I think, on Tuesday or Wednesday and he will probably be out for eight weeks.

"We are probably looking at 1 February for both him and Steven, so we might as well get the bad news out of the way, because that's what it is, and just focus on what is important, and that's what we have got left."