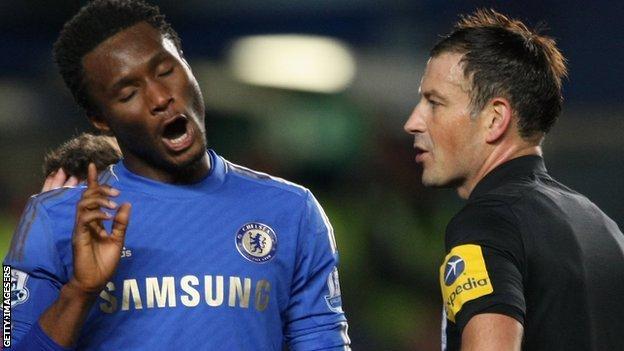 The Blues have accused Clattenburg of using inappropriate language towards midfielder John Obi Mikel in their 3-2 home defeat by Manchester United.

Clattenburg, 37, has denied the claims.

The FA has interviewed Clattenburg, Mikel and several other Blues players. A decision is expected later this week.

The referee has returned to training with the Select Group of Premier League officials, but will not take charge of a top-flight match this weekend.

Clattenburg has decided jointly with Mike Riley, the head of the Professional Game Match Officials Board, that he should not be in charge of matches while the case is still open.

Police dropped an investigation into the alleged comments towards Chelsea's Mikel and Juan Mata in the Premier League match at Stamford Bridge last month.

Chelsea initially suggested Spanish midfielder Mata had also been verbally abused by Clattenburg, before deciding there was insufficient evidence to support these claims.

The west London club made a formal complaint about the alleged comments towards Mikel to the FA, which has also interviewed Clattenburg's assistant referees Michael McDonough and Simon Long and fourth official Michael Jones.

An independent QC is studying all the evidence in close detail before recommending a decision.