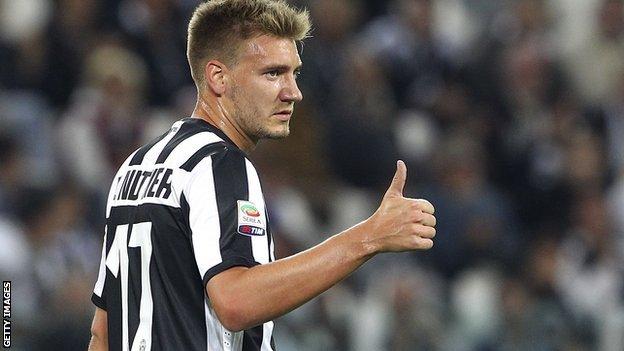 Nicklas Bendtner is hoping to kick-start his career at Juventus by helping them beat Chelsea in their crucial Champions League game on Tuesday.

Juventus host the European champions, trailing the Blues by one point with two group games to play.

Striker Bendtner is on a season-long loan at the Serie A side from Arsenal.

"I have come to one of, if not the, the biggest club in Italy to win something, to play and to score goals," the 24-year-old told BBC Sport.

Bendtner has been limited to two starts in seven appearances in all competitions for the Italian league leaders but is hoping to make more of an impact now that he is fully fit.

He said: "It took me a month or so to get fit but now that I am I've played many games, coming on as a substitute.

"Obviously, I hope to establish myself even more in Italy and start scoring goals for Juventus."

Bendtner joined Arsenal in July 2005 but after struggling to establish himself in the first-team and a loan spell at Sunderland last season, he believes his move to Juventus was "good for everyone".

Asked about whether he would be returning to Arsenal, he replied: "You can never rule anything out but I am focusing on my career here and I'll see where that takes me.

"Arsenal is still a great club and I had some great times there. At times I thought I should have played more. I've scored a lot of important goals while I was there.

"I did start to play on a more regular basis but then I had that terrible car crash [in September 2009] which set me back. When I came back after that it was difficult because the other players performed really well.

"I then went on loan [to Sunderland] and played every match. I felt strong and fit again going into the Euro 2012.

"I had a good European Championship and the last year set me up for a move away and it's what I wanted and what I was ready for."

Bendtner feels he has now acclimatised to the emphasis on the tactical side of the game in Italy compared to the "faster" pace of English football.

And, going into Tuesday's game against Chelsea, he knows that Juventus need to be wary of their rivals who have failed to win in their last four league games and have gone nine outings without a clean sheet.

"I don't think you can underestimate Chelsea," he said. "Even though they haven't won in four games they are always difficult to play against.

"They also won this competition last season so we have to stay on our guard and make sure that they don't win this game either."

Juventus know the importance of a win against Chelsea as the Serie A outfit face a tough trip to Shakhtar Donetsk in their final group game, while the Blues host group strugglers FC Nordsjaelland.